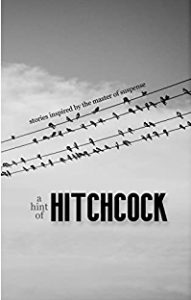 I couldn’t resist answering the call to write a story inspired by one of Alfred Hitchcock’s movies. Being a long-time fan of Daphne du Maurier’s novel, Rebecca, and having enjoyed the film he made of the book, this seemed the perfect choice. But how to write a story that referenced the film, and yet still stood independently – that was the challenge. The solution came to me when I remembered that there had also been a play of Rebecca. I had seen a production of the play when Vagabond Players produced it some years ago and had found it disappointing, for the constrictions of live theatre prevented the playscript from having the dramatic impact that Hitchcock recreated so effectively on film. However, the existence of the play gave me my independent plot. My characters were actors who had starred in the play, and although Rebecca played a strong influence in their lives, their story led in a totally different direction. All the same, I think I managed a Hitchcockian twist at the end. “Rebecca Redux” was great fun to write. I hope readers of the anthology will have as much fun reading it.

A Hint of Hitchcock pre-order just $1.99 AUD instead of $3.99 until this weekend. Take advantage of the deal by pre-ordering today. https://amazon.com.au/Hint-Hitchcock-Stories-Inspired-Suspense-ebook/dp/B0B9VDVHMF/… #ahintofhitchcock #blackbeaconbooks #hitchcockian

Thrilled to have a story in A Hint of Hitchcock