Skip to content
[box]A year ago I wrote the following blog about Agatha Christie’s play, Go Back for Murder. What a delight now to be able to post pictures from the wonderful Vagabond Players production. And yes, I did end up designing the set![/box] 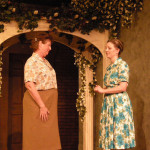 I’ve read and enjoyed all Agatha Christie’s books, and seen many of the television plays that have been made from her stories.  I’ve usually liked the BBC series with Poirot or the various Miss Marples, but I have mixed feelings about the stage plays, since so many of the productions I’ve seen have seemed stilted and lacking in action.  The Mousetrap, which is by far her most famous play, is bogged down in interviews all through the second act, making for a static production until the final confrontation.  Therefore, when looking for an Agatha Christie play for our theatre group, I searched for one that had some variety within the characters and settings, and most of all, did not have a detective in the cast list. 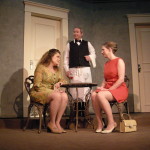 Go Back for Murder seems to fit that bill nicely.  The first act is certainly a series of interviews, but the settings vary, and the character of the interviewer is far more engaging than that of a professional sleuth.  Carla Crale is a young woman who has just come of age and learned that her mother, Caroline, was a convicted murderer.  She is engaged to be married and worried about the impact of this discovery on her fiancé, but even more importantly, she has been given a letter that her mother wrote from prison telling her that she was innocent.  Therefore, she has a strong personal motive and a deep commitment to finding the truth. 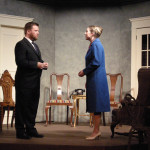 There is also the young lawyer who helps her, and who clearly dislikes her fiancé, so in addition to the ‘Murder in Retrospect’, there is a present-day triangle to provide dramatic interest. The second act goes back in time to the original murder, so that the audience, having heard the details from the point of view of the participants many years later, can now see what happened and judge for themselves whether or not Caroline Crale was guilty.  And when the final solution is reached, there is still the conclusion of Carla’s own story to provide an upbeat ending to the piece—something that is very important given that no one expects to go out of a cozy Agatha Christie mystery feeling depressed. 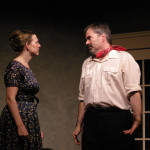 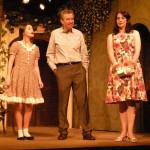 I thought it an interesting possibility for my own theatre club, the Vagabond Players in New Westminster, and was delighted when the play selection committee agreed with me.  Now I’m very much looking forward to seeing the play on stage, and I might even offer to design the set too!

[box]Vagabond Players production of Go Back for Murder, directed by Jacqollyne Keath, is now in the second week of its run. Performances continue February 6 – 21, Thursdays – Saturdays at 8:00 pm and Sundays at 2:00 pm, the Bernie Legge Theatre, Queens Park, New Westminster, 604-521-0412[/box]
Go Back for Murder – now on stage at the Bernie Legge Theatre