Throughout January and February, the weather was cold and frosty, and, as it often is at that time of year, most of the family was sick. Caroline had a particularly nasty dose of flu, and Hugh was laid up with a stress fracture in his foot. Katie and I both succumbed to bugs, one of Hugh’s nephews had a lymphoma, my father’s health was failing, and my mother was having trouble coping. On top of all this, there was a spate of bad news. Bill Lewarne, the girls’ ‘Jellybean mayor’ died of a heart attack, and my beloved singing teacher, Luigi Wood, fell ill and had to be hospitalized.

Max, not to be outdone, managed to be invalided out again, first catching his eye on something sharp during a run in the woods, and later, more seriously, re-injuring his bad foot. During our morning walk, he ripped the high pad on his front paw. He valiantly licked his foot all the way home, but once I examined the pad, I realized it was beyond my skill to fix the injury. Max had nearly sliced the pad off, so another trip to the vet was called for. Max was not at all happy once he realized he was to be left there, but he had to be put under and stitched up properly. However, later that afternoon, when I went to pick him up, he trotted out, wiggle, wiggle, wobble, wobble, perfectly happy as he followed Dr. Zinger and his assistant into the reception area.  He was very impatient while I settled the bill, and clearly anxious to go home. Once there, he settled down happily, enjoying all the fussing he received from Hugh and the girls as they arrived home. 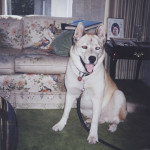 The next few weeks were labour-intensive, since Max was not an easy invalid. The day after his surgery, he managed to tread in a puddle as we walked round the block, and I had to spend twenty minutes blow-drying his bandage. That afternoon, I had theatre tickets for a matinee, and when I got home, Max greeted me with a big smile-face and a pile of gauze. He’d entertained himself in my absence by chewing off his bandage. Hugh and I carefully rewound the dressing, and the following day, I covered Max’s foot in saran wrap before going for the morning walk. This worked like a charm, although it made for prolonged preparation before each walk. Max accepted the extra attention in typical lordly fashion, quite happy to have his owner grovelling at his feet attending to his needs. He was not so happy when it was time to go back to the vet to have his foot checked. When we entered the office, the receptionist greeted us with: “Oh, I’ve heard about Max! Has he eaten any light bulbs lately?” Max quivered with fright while his bandage was being changed, but became very perky once he realized that nothing else was going to happen to him. He accepted a cookie and a pat from Dr. Zinger and positively bounced out onto the pavement. His good humour increased when he realized that we were going for a walk in Queen’s Park before picking Caroline up from skating. He sniffed all the rabbit holes and behaved graciously to the other dogs, and was quite on his best behaviour. Relief brought out the best in Max.

The next day, however, he lapsed again and led Katie a chase about the garden when she went out to leash him before school. She came in fuming, with a sheepish Max in tow, and informed me that I could tell the vet that there was nothing wrong with Max’s foot. Later that morning, I left Max home while I went out to do some errands—and returned to find he’d chewed off his bandage yet again. This meant I had to re-wrap his foot and take him along with me whenever I went out for the rest of the week. On the weekend, it was back to the vet yet again to be told that the stitches had to stay in for another week.

By mid-February, the snow arrived, sufficiently heavily that school was cancelled on the fifteenth of the month.  Hugh happily went back to bed with his cup of tea, but our comfort was short lived as Katie took Max out to play and somehow he slipped and ripped his pad open again. So while the girls went tobogganing with their friends, Hugh and I had to brave the weather and take Max up to Dr. Zinger to be re-operated on. The result was another massive bill and several more weeks before Max could run again. And given the snowy weather, it also meant that his paw would have to be triple-wrapped before every outing. But was Max unhappy? Not a bit. When we went back to collect him that afternoon, he heard our voices in the reception area and sang his little heart out. Then, having got all the other dogs howling, he bounded out, not in the least bit groggy, accepted his pats and cookies, and looked at the other waiting dogs as if to say, “No sweat, this vet stuff. I’m a pro. I’m Max, the Ho Hum Husky!”