The next few weeks were taken up with preparations for our new and revised Babes in the Woods production. It was good to be busy, since I was very worried about my singing teacher, Luigi Wood. He had collapsed and been hospitalized, and as the weeks continued with no lessons and no word of improvement, I became deeply concerned. However, soon he was allowed visitors, and when Hugh and I went into St. Paul’s hospital, Luigi looked frail but was pleased to see us and seemed to be rallying. 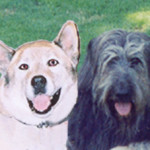 Max was also rallying and he was enjoying his walks again, able to run and play with Brandy. He wore his harness in the snow and loved leaping about while the children had snowball fights. He enjoyed weekend Foreshore Park walks, and on weekdays, trotted around Queens Park, sniffing new smells, while we waited for Caroline to finish her skating lessons. However, his good humour evaporated come the Saturday when we took him to the vet for a final check of his foot. Being the weekend, the place was dog city. Big dogs, little dogs and puppies galore filled the waiting room. Max was overwhelmed and sat quietly in his corner, watching as the other dogs were called in turn. Every time Dr. Zinger appeared in the doorway and called out a name, Max looked anxious at first, and then relieved that the call wasn’t for him; however, when Max’s turn came, instead of looking at the file and calling a name, Dr. Zinger peered round the waiting room, spotted Max quivering in his corner, flashed a broad grin and simply beckoned our naughty dog. I expected Max to shy away, but to our amazement, he got to his feet, slunk into the examination room and then leaped onto the table all by himself. Was he trying to demonstrate that he was fine and didn’t need to be there, or simply expressing his desire to get it over with as soon as possible? Whatever the reason, we were all most impressed. 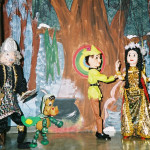 The month continued with a fever of show preparation. For a couple of weeks, all I did was cut out costumes for the new puppets and sew all day. When the costumes were done, it was time to create practice tapes for the recording artists: Bob Werner, Brian Leonard and Mike Scannell. To create the  tapes, I had to sing and record all the parts, no matter what the register; then mix the tracks and dub copies, complete with annotated notes. Once these were delivered to the singers, it was time to work on the sets. 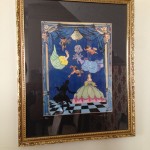 Amid all this creative activity, we did find time to admire the work of another creative artist. Jim Keary, whom I’d met during a production of H.M.S. Pinafore, had started making collage prints with theatrical and musical themes. We attended his show at the New Westminster Art Gallery and were so enchanted with his work that we came home with two prints. This began a long and enjoyable relationship over many years as we attended Jim’s shows and added to our collection. His lovely opera collages are all around our dining room today, a wonderful reminder of a lovely person who is greatly missed today by me and many of my theatrical friends. 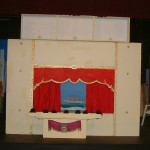 Once my vocalists had been given a couple of weeks to learn their parts, the recording sessions began, followed by weeks of mixing and editing. Hugh was busy too, creating two beautiful talking trees for the Babes production along with a new travelling theatre, one that was more lightweight and better equipped for our sets. To give the proscenium an old-world look, he use spackle to create depth and the result was truly charming. Luckily, we had no idea that we would lose this theatre thirteen years later when our trailer was to be stolen and never recovered, but at that time, we were full of enthusiasm for the project and had nothing but positive thoughts about our puppet venture. However, in spite of our upbeat mood, my world was about to take a devastating turn. One evening, I received a call to tell me that Luigi had had a sudden downturn and was in intensive care.  Within the week, my beloved music teacher had died. He was such a kind and wonderful man, much loved by all his pupils, and his death left a huge gap in many, many lives. A couple of weeks later, his memorial service was held. Not surprisingly, the music was glorious, for the church was filled with all the singers that he had trained. It was a fitting tribute for such a fine teacher. 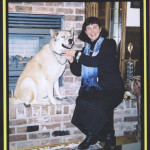 Losing Luigi made my days very bleak in the subsequent weeks, and, as so often is the way of the world, other events were imminent that would bring hard times to our  family. My father’s health was about to take another downturn, and another crisis was looming that would cause several years of grief. Those were the years that Max, for all the ups and downs he instigated, proved to be a wonderful friend. When any member of our family, felt low, he would be there, tucked up at our feet or placing his head in our laps, soothing our nerves, forcing a smile and providing the unconditional love that only pets can give. Our Ho Hum Husky became a source of smiles when laughter was rare and proved truly worthy of the title, Man’s Best Friend.