The Cariboo section of the holiday was fun. The days passed with swimming, boating and trail riding, not to mention churning out meals for four hungry kids and keeping Max from assaulting Alfie in the campsite next door. Everything in the country seemed to go in slow motion. On the way back from a trail ride, we stopped at a farm for provisions and took twenty-five minutes to buy two lettuces.  First I had to check all the buildings until I found the owner; then I had to follow her down numerous trails to the garden where I got to pat the dog and assorted farm cats, admire all her vegetables and take appropriately serious care in selecting the two she was going to cut for me. 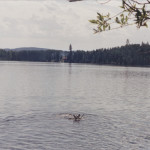 Max quite liked country life, but the wildlife began to impact on his naughty genes. He would go swimming with us in the lake and paddle alongside us in formation—until he saw a loon, at which point he would change course and dog-paddle determinedly in its wake. He never seemed to register the fact that water birds could elevate or dive, making his quest utterly hopeless. He started to be very misbehaved on our trail walks, and one night, he ran off up the mountain and I stood in the dwindling light, blasting my dog whistle for fifteen minutes before he returned, wild-eyed and exhausted.  I thought he was going to have a heart attack from running so hard.  We made a very slow trip back to camp, stopping every few steps so he could lie down and rest. After that, it was strictly leash walks, even though Mr. Mutinous was not impressed. 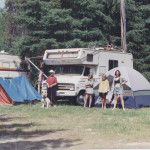 k at Timothy Lake, we had to strike camp and move on to our next booking.  We said our farewells to our friends in the next campsite, but Max managed to blot his copybook yet again. His idea of saying goodbye was to get into a scrap with Alfie. We had to detach them from each other’s ears and jowls and stand them in opposite corners while we finished our adieus.  After that, it was a long, hot drive to Salmon Arm.  Max hated it. We had to keep pouring water on him to cool him off.  Finally, we stopped at a Petrocan station and hosed him down. Then we bought ice creams for everyone. Max swallowed his whole, down in one gulp, his eyes bulging with greed. 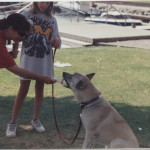 We reached Pierre’s Point at four-fifteen and quailed the moment we arrived. Why had we left the Cariboo? This site was like a big city, a glorified tenement by a lake.  There were miles of sites and masses of people; no-dogs-on-beach signs, concessions and video games; radios blaring and washrooms full of mothers with screaming tots—and worst of all, trains roaring by every forty minutes.  We gave up trying to be productive and went for a swim.  Then we bought dinner at the concession and collapsed in our deck chairs to listen to the blare of portable radios and the screams of train whistles. Max’s face was eloquent: he clearly thought we had entered a madhouse and were as insane as the occupants to be there. After a ghastly night with trains running every hour, we called Peachland and arranged to move on the following day. This was definitely the right decision, for after dinner, the wind and rain started. Then there was a set-to in the adjacent campsite that caused the police to be called in.  That night, I stuffed earplugs in my ears, wrapped my head in my sweat top a 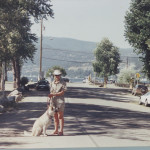 The next day, we headed for Peachland, stopping at the Kelowna waterslides along the way.  Hugh and I bought more provisions while the kids enjoyed the slides—four teens and preteens ate an amazing amount of food—then we drove the rest of the way.  The Peachland Trailer Inn turned out to be small and quiet with manicured gardens. It was the antithesis of what we had just left, but the sense of orderliness was a little ominous. Hugh and I looked at each other and read each other’s minds:  A boy in a pup tent, three girls in the Pigloo, and Max? Maybe not quite a match made in Heaven!

Next: More disasters and another speedy exit.