Max loved the summer. He particularly enjoyed the extra visits with my parents. There were more of these than in previous years, given my father’s health. Dad was being very brave about his cancer but Mum was extremely anxious. She had high blood pressure and a minor heart condition, and she was becoming very nervous about my father’s illness. What we did not realize was that she was having a series of mini-strokes that were ultimately to lead to her dementia, so both parents were in need of care and assistance. 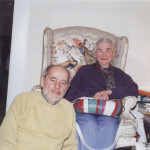 Max loved Nana and Gamma dearly. He was always thrilled when they arrived at our house, and visibly put out any time he came to the station to see them off and saw them swallowed up by the Skytrain. He particularly enjoyed the trips to their house in West Van, and these became increasingly frequent once we realized we could go over in the motorhome, complete with a small BBQ, and provide meals-on-wheels service using the camper kitchen as our base. Max had great fun trotting between the house, the camper and the BBQ. We became most proficient at this, serving up menus such as bacon wrapped steaks topped with asparagus, crab and béarnaise sauce combined with new potatoes and home-made fudge for dessert. 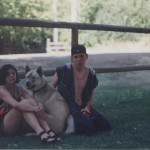 n it was time to set off for a proper holiday in the motorhome. This year, we had extra youngsters in tow. Caroline had her very first boyfriend and was reluctant to head out of town for a family holiday, so we said Andre could come along as long as he brought his own tent and camping gear. Katie immediately demanded equal treatment, so her friend Candace had been invited as well. Thus, we were planning a trip to the Cariboo that involved me and Hugh sleeping and cooking in the motorhome, one teenage boy in a pup tent to the right of the camper, and three giggling girls in an igloo-shaped tent (immediately christened the pigloo for the state it was usually in) on our left. Max found all this extremely entertaining. He liked Andre and approved having another guy-guy along. Candace and Katie were young, loud and shrill, so he was not so sure about them. When I saw the ears going flat and the wolf mask scowling, I knew it was time to make him sit with me and tell the girls to keep their distance. 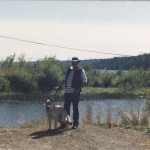 Our first stop was Timothy Lake in the Cariboo. Once we were settled, Hugh and I took Max out in the boat and checked out the islands at the far end of the lake. Max scampered about, delighted to be free once more and we threw wood for him so he could swim. He was not so pleased when we returned to the campsite and discovered that a gigantic ten-year-old German shepherd named Alfie was in the next site. Alfie had huge ears and a calm manner, and obviously considered Max a naughty young whippersnapper. The two were tied up side by side and soon settled into a truce, though Max took great pleasure in flaunting his chew toys in front of Alfie. Needless to say, Max was most indignant when I gave Alfie one of the toys. Alfie chewed happily for the rest of the day while Max just guarded his and looked baleful. 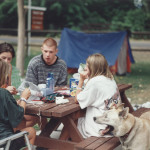 family next door was useful. Alfie’s owner told me where the best trails were for dog-walking, and that evening, while Hugh went fishing, the girls and I took Max for a run. The next day was great fun. We were in and out of the water all day. Katie and Candace enjoyed the pedlos and the other camp children. Caroline and Andre set off to explore the connector to the adjacent lake. Seeing them heading out in the boat reminded me of the Swallows and Amazons books my brother and I read as children. How we would have loved the opportunities that my children enjoyed. As a little London kid, I only got to read about such adventures, but my girls were both proficient little boaters.

Once the kids returned with the boat, Hugh and I took Max out and explored the river at the end of 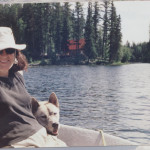 the lake. We found a minuscule isle in the second lake, so stopped to let Max swim. On the way back, we saw a mother duck with an adorable fleet of babies. I was so busy cooing that I didn’t notice the gleam in Max’s eye and before we knew it, he’d leaped overboard and was gliding through the lily pads with the smoothness and determination of a naval destroyer. Poor Max. No matter where he looked, all he found was a host of lily pads. Once he realized the ducks were impossible to catch, he swam back to the boat. Hugh and I were swamped heaving him on board. He was very pleased with himself, but we had a very wet trip back to base. As we squelched into the campsite, Alfie looked up from his chew toy. His expression said it all. What do you expect when you adopt a delinquent!

Episode Forty – Off on holiday again.