Skip to content
Peachland was hot. It was also immaculate and not dog friendly. However, with the help of another dog walker, we discovered some trails alongside a creek where Max could have a bit of a run. He was apprehensive to find a waterfall at the top of the hike, but after a while he splashed about in the pool, revelling in the opportunity to cool off.  On his return, he took off after a waterbird and roared down the creek, racing into the parking lot where two artists were sketching.  We found huge skid marks in the earth a few feet from them, but fortunately they both had big grins on their faces and had made friends with the naughty fellow. 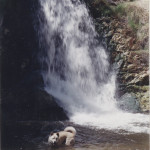 The rest of the day was not fun. I was unwell and ended up having to visit a local doctor who decided I was suffering from beaver fever from the Cariboo trip, so I picked up a prescription and headed back to camp to read and relax for the rest of the day. The kids entertained themselves happily, especially as the campsite had an outdoor ‘cinema’ where they were able to watch a video of Homeward Bound while they ate their dinner. 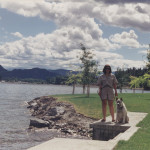 Hugh was very witty on my behalf, pointing out that if I imbibed more like him, I would have disinfected my stomach and not become ill. So having imbibed over dinner, he decided to take off on his bike for a ride around the local sights. Half an hour later, he returned bloody and bruised with two young men in tow who informed me the ambulance was on the way.  He’d fallen off his bike and hit his head.  He was dazed and uncontrollable in his general state of confusion. Despite me trying to make him rest, he wandered down to the road so I followed with Max and waited with him until the ambulance came.  Max promptly hopped in after Daddy so that the attendants had to come back out and tell him he couldn’t come. Max was a little bewildered as we saw the ambulence off. Reluctantly, he came back with me to the campsite.  The kindly campsite owner went to pick Hugh up at ten-thirty that night, and he came back with his wrist bandaged, his eye stitched, and a bump like an egg on his forehead.  Possibly a hairline fracture, but no concussion. As I pointed out, my beaver fever was the lesser of two evils. 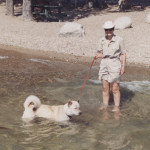 The next day, Hugh awoke looking like Frankenstein’s monster.  The kids oohed and aahed, and we all agreed he’d better get a ski mask, or at least sunglasses before he could be seen in public. We made a big breakfast, then set off for Penticton.  We stopped at the waterfall park on the way down so that Max could have a trot and a splash.  Then we went down the spectacular drive that followed the edge of Okanagan Lake.  If it hadn’t been so hot, I could have appreciated the view more, but our motorhome in those days did not have air-conditioning.  Once there, we drove around Penticton in excruciating heat and finally stopped on the canal so that Max could jump in and cool off.  Then we dropped the kids at the beach and went off in search of a restaurant with shade. Afterwards, we picked up some groceries, then went back to the canal to dunk Max again.  I needed dunking myself as I felt sick from the heat.  Then we picked up the kids, cancelled our reservation at South Beach Gardens and headed back to Peachland where we went for a swim to cool off. 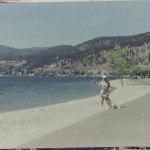 The next day, Hugh’s eye was still puffy and purple.  We had both had a bad night due to the heat and were like limp dishrags in the morning. The whole day was excrutiatingly hot, and as the evening wore on it was as if a lead blanket had descended.  Caroline and Andrew went exploring up the river, and as they reached the bald rocks at the foot of the mountains,they said a great wave of hot wind had rolled down at them. Poor Max was utterly miserable, and cranky to boot, so we gave him a bedtime walk and pushed him off the dock to cool him off.  Then we went back to camp, where I slept in the deck chair in the hope that outside would be cooler than inside. Before I nodded off, I vaguely realized that Katie and Max had joined me, one on each side of my chair. I glanced down, and the image of Max’s face stayed with me as I drifted off to sleep. His expression was eloquent. What a dumb place to take a holiday with a husky!
Episode Forty-two: Camp hot dog!