Audiences will have another opportunity to see Vagabond Players’ enchanting production of Goodnight Desdemona (Good Morning Juliet) when the play opens the Theatre B.C. Greater Vancouver Zone Festival on Sunday, May 4 at Vancouver’s Metro Theatre.  New Westminster audiences raved about this entertaining production during its run at the Bernie Legge Theatre, and if you missed it there, it’s well worth a trip to Metro Theatre to catch the festival performance. 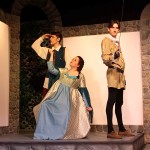 Exceptionally well-acted and visually appealing, the play is a fantastic comedic romp through the world of Shakespeare, made even more hilarious by the reactions of the modern-day heroine who finds herself transported to the worlds of Othello and Romeo and Juliet. What is truly engaging about Desdemona is the lovable heroine, a sympathetic underdog, who embarks on a quest for an unknown author and ultimately finds that it is her own pen that turns to gold.  Her journey of self-discovery is every bit as human as that of Shakespeare’s heroes and heroines, and amid the fun and frolic, the story is touching and appealing. 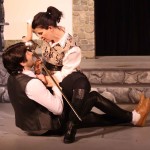 Karryn Ransom is outstanding as Constance Ledbelly, the transported academic, and her bravura performance is something that every theatre lover should put on their must-see list. She is supported by an exceptionally fine cast of actors in the various Shakespearean roles. 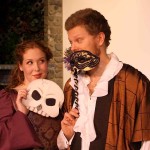 Chris Fofonoff is a deliciously flamboyant Othello in the Cyprus segment; then he returns for the Verona scenes to deliver a hysterically funny performance as Juliet’s nurse.  One minute, Rose MacNeil is a magnificent Amazonian Desdemona; the next, she plays the fiery and impetuous Mercutio. MacNeil also has a very lovely voice which is used to great effect at the start of the ballroom scene in Verona.

Kurtis Maguire gives dash and vitality to the feisty Tybalt, but also romps through the role of a knowing ghost who helps Constance in her quest.  Alex Ross delivers a wonderfully sinster performance as the scheming Iago, who, shown in his true colours to Othello, turns his machinations towards Desdemona. 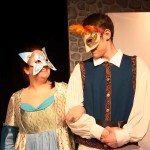 Boris Bilic and Carly June Friesen provide tremendous fun as Romeo and Juliet, saved from calamity and forced to live with each other when they are far more interested in finding new adventures. Every one of these actors give stellar performances in their main roles, yet adeptly handle other parts throughout the play. 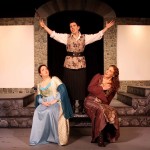 Desdemona has won many awards, including the Governor General’s award, and the audience’s reaction to the Vagabond Players’ production makes one understand why. The clever script is so full of fascinating twists and turns that every viewing seems to offer something new and interesting to think about. The play demands top-notch performers—and some top-notch technical wizardry too, handled with great flair by lighting and set designer, Matt Davenport. Alison Main-Tourneur’s beautiful costumes also add much to the visual appeal of the production. 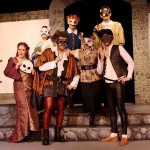 Ably directed by Michael Parker, Goodnight Desdemona (Good Morning Juliet) is a must for theatre lovers everywhere. Don’t miss this special festival performance, this Sunday at Metro Theatre, 1370 South West Marine Drive, Vancouver.  Tickets are available at the door or at http://theatrebc.org/gvz-box-office/