May of 1994 was dominated by trips to the ice rink in preparation for Caroline’s figure-skating competition and family time in front of the TV as the Canucks steadily made their way to the Stanley Cup Final. Max dutifully tagged along on the trips to the rink or sat at our feet while we watched hockey games. Amid all this, I was trying to make sure the girls’ homework had equal time with hockey, helping my parents with their ongoing struggle over Dad’s illness, and attempting to fit in training sessions with Max. Somewhere in between, my tired brain was still struggling with my recording system.  Needless to say, haute couture was the last thing on my mind, witness the following diary entry:

My watch, whose battery is dying, coughed feebly at six am, so I dragged myself out of bed, threw a coat over my nightie, stepped into my wellies and drove Caroline to the rink.  Caroline stared at the glasses perched on my nose and the rest of my ensemble. Her silence spoke volumes.

My stress level even showed up in my sleep.  One night I dreamed I was transporting Caroline, her skating friends and Max (plus all the girls’ skate bags) up a never-ending hill—on a bicycle!  Awoke, not surprisingly, with a splitting headache.

Once again, the constant turmoil had a negative effect on Max’s behaviour. Walks were chaotic. He began to take off after the coyotes and go on long runabouts through the bush while Edna and I blasted on our dog whistles and bellowed to call him back. Brandy would sit demurely during these episodes, her body language expressing disapproval of her friend’s bad behaviour. On one of these occasions, Max hit gold and actually found the coyotes’ den.  He came back reeking of fish and extremely pleased with himself, although he wasn’t so happy when we got home and I hosed him down.

Edna and I went back to searching for alternate routes, and to our delight we discovered a network of new trails, including one that went right down to the Brunette river. Max and Brandy loved this walk, and would splash and play in the river, bounding in and out after sticks and roughhousing at the water’s edge. However, Brandy was more timid than Max, and no matter how Edna tried, she couldn’t get her to swim. Max was the one who finally motivated her to try. 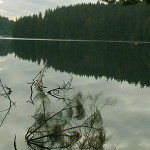 On the May school professional day, Katie decided we should take our new motorhome to Sasamat Lake and have a picnic.  Her friend, Jennifer, came too, so we packed our lunch and set off to pick up Brandy and Edna.  Brandy was startled to see the motorhome rolling up, but she finally condescended to hop aboard when she saw it contained me and Max. Having decided she liked this new mode of transportation, she promptly took over, sat between me and Edna, growled at Max and refused to let him sit up front.  Amazingly, Max took this treatment docilely and padded back to sit with the girls. Brandy obviously had special status in his life—or it might have been merely the fact that the girls had snacks for the trip. 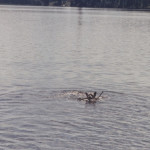 When we arrived, we hiked around the lake. Brandy, who had never been there before, was wary of so much water. However, Max became the canine equivalent of the jock in a Speedo showing off at the pool.  He leapt in and out of the lake and took every opportunity to demonstrate his prowess.  He kept swimming far out from shore, which frustrated Brandy as she liked to be with him.  Finally, she ventured further out, fell into a deep spot and found to her surprise that she could swim, albeit with a rather panicky dog paddle.  From then on, any time we visited the water, Brandy would plunge in and do her frantic splash step while Max performed his stately battleship glide. As for Max, he seemed very proud that he’d taught his friend to swim.  He wasn’t an Alpha male for nothing.