According to my diaries, the two challenges that dominated the last part of April that year were conquering my 8-track recording system and keeping my naughty dog in line. Max was so unpredictable.  One day, he’d be good on our walk in spite of meeting new dogs and spotting a coyote.  The next, he’d go walkabout on the trails and refuse to co-operate. He behaved impeccably while being pet-sat by my parents on the North Shore, topping off his gold star by trotting round Lighthouse Park with me and Dad without so much as a woof at the West Vancouver dogs.  But the very next day, on his own territory, he promptly got into a scrap with Harley, the dog he’d challenged a couple of weeks before. 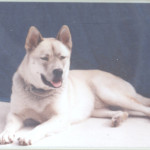 Once again, Edna and I headed for the lower, less-frequented trails in the hope of dodging such encounters.  On the plus side, on one of these walks, Edna found Max’s collar where he’d lost it in the bush, but on the downside, there was always the risk of coming across the coyotes. We tried taking different routes to keep Max off guard, although this backfired on us one day when he plunged into the bush, lost his sense of direction and had a panic attack. For a tough guy, he could be a real baby at times. It took the two of us several minutes of pats and soothing talk to calm him down.  Max was actually quite a nervous dog, being easily startled and frightened of loud noises.  Once when Hugh and the girls were watching hockey on TV, they broke into hoots and cheers as the Canucks scored. Poor Max slunk off to the deck, ears back, head down and his wolf mask signaling bewilderment and distress.

But of all his traits, the one that made him most difficult to train was his stubborn refusal to accept that I was ‘the master’.  He wanted so much to call the shots.  One day, I worked with him after dinner. He went through his paces nicely, and then it was time to practise retrieving. At this point, we hit an impasse over the tennis ball.  He chased it part way, then stopped, abandoned the idea of retrieving it, came back and looked at the cookie in my hand.  When I told him he wouldn’t get the cookie until he fetched the ball, he lay down and glowered at me.  I promptly sat on the steps, told him he knew what he had to do and stared back at him.  After a few moments, he burped and looked at me for a reaction.  Seeing none, he tried to ignore me.  He looked off into the distance, glancing back periodically out of the corner of his eye to see if I was still watching him. The stand-off lasted almost five minutes.  Finally, he couldn’t stand it anymore.  He got up, the mutinous scowl still on his face, fetched the ball, and threw it at my feet.  Victory at last, but Gary Gibson was definitely right. Naughty Max was more dog than most!