Shakespeare definitely had it right when he wrote: “When sorrows come, they come not single spies, but in battalions.”  March, that year, not only came in like a lion, but went out leaving us feeling as if we were facing a whole Colosseum-full of the growling beasts. Faced with the news that my father had been diagnosed with cancer, I realized there would be many challenges for the family ahead. Had we realized that this sad news would be the precursor of fifteen years of troubles, heaven only knows how we would have coped.

In that first month, it was as if the worry over my father sent the whole family into a tailspin. Everyone was sick, I was diagnosed with an auto-immune inflammatory arthritis, and Max had his first (of several to come) biting incidents—this latter occurring when I was on the phone hearing the results of my father’s tests.  I had kept Max with me all afternoon while Katie entertained a group of friends, all of whom went home at dinnertime.  I saw the girls off, then went back to hearing Dad’s prognosis and finding out what was to be done for him.  Two minutes later, there was a knock.  One of the girls had returned to get something she’d forgotten, so I sent her downstairs to fetch it, by now completely distracted by my father’s news so I didn’t notice that Max had followed her.  Next thing I heard was a yell.  Max had found a dress-up to carry, Katie had told him to drop it, and her friend had yelled at the dog, tried to snatch it from him and got nipped.  Her skin was not broken, but there were two clear dents. 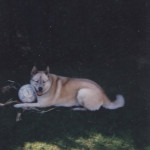 On top of the worry over my father, this was the last straw.  When I phoned the girl’s mother and explained, she was nice about it, and Katie’s friend was back the next day to play, so she couldn’t have been overly traumatized. Still, it was a worrying precursor of things to come.  Max was quick with his mouth, and vigilance was going to be the order of the day if he wasn’t going to get in a lot of trouble.  Even when there is provocation, the dog is always blamed and is held accountable when there is a biting incident. Somehow, we had to protect Max from himself and those alpha-male, husky-wolf genes.

Max was such a strange mixture of lovable pup and misbehaved tough guy.  In many situations, he was fine. He loved to go to Lighthouse Park to walk with my father, and was always wild with excitement when he leapt out of the car and saw his namesake on the trail. He socialized politely, if suspiciously, with the West Vancouver dogs, as if he understood that he was the visitor and this was their territory. On trips to the vet, he sat sedately, ignoring the other dogs in the waiting room and behaving politely with Dr. Zinger. When we took him for runs on the power line, he’d tear up and down, bound through streams and swamps, hurtle through the bushes, and come home happy and covered in mud, though he squirmed a lot as we hosed him off.  Yes, he caused a lot of worry, but he also brought a lot of joy.

In fact, in hindsight, knowing how difficult the next years were to be, I realize that, for all Max’s naughtiness, his cheeky presence in the family provided a source of solace that helped us get through the tough times.  He was certainly a great comfort to me during the day when the rest of the family was at school.  He would lie at my feet, under the computer desk or the music keyboard, sighing blissfully at the music, or if I was painting scenery, he’d find his way to the studio, simply happy to be with one of his people. Yes, he was a difficult dog, but when it came to unconditional love, nothing could beat him. The troubles kept coming, but Max would wag his tail and snuggle up to his people, and every member of the family would smile and feel restored. That Ho Hum Husky had a way of putting everything in perspective.

Next:  Max goes across the line.