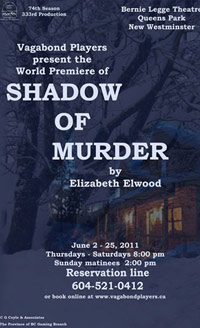 Intelligent dialogue … all the necessary twists and turns for a good murder mystery plot. – Canadian Playwriting Contest critique
If you are really fast, you can catch a great evening of mystery/comedy, by enjoying Shadow of Murder ……Be prepared for some unexpected murders, amid entertaining cross-talk among the cast, and a surprise ending you are challenged to guess. –
Annie Boulanger, Burnaby Now
Click here for larger image

The Morton family suffered a tragedy when their daughter was the victim of a serial killer. Two decades later members of the family gather at the Marshlands Hunting Lodge, where unbeknown to them, two people are present who are connected to the earlier crime. A storm causes landslides that render the access road impassable, and before long, another murder takes place.

The large number of characters make this script highly workable for community groups, and the cameo roles and smaller parts are ideal for crew members who wish to have a moment on stage. However, two of the cameo roles could be eliminated if necessary, and some of the other parts could be doubled, so the play can also be used as an acting challenge for a smaller troupe of actors.