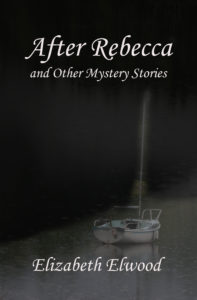 Philippa Beary loved the Daphne du Maurier novel, Rebecca, from the moment she read it as a teenager. Therefore, she is amazed when she comes upon a deserted lakeside estate that bears a remarkable resemblance to the setting of the book. She is even more disturbed when she learns that the eerie mansion holds the secret to a murder. Between the thoughts of the troubled wife whose husband is suspected of murder and the narrative that follows Philippa’s adventures as she tries to unravel the truth of what really happened at the estate, “After Rebecca” provides an intriguing puzzle for mystery lovers and nostalgia for those who remember the book that inspired the story.

“After Rebecca” is followed by seven more fascinating stories to challenge and absorb the reader: Charges of assault are laid against two teachers forty years after the fact; A world-famous diva dies at the final curtain of Puccini’s La Bohème; One snowy Christmas, a child’s kindness to a vagrant brings closure to a mystery that dates back to WWII; A superstar is kidnapped from the set of his werewolf movie; and danger and romance await Philippa when she performs at the Charlottetown festival. Elizabeth Elwood’s sixth book featuring the lively Beary family is sure to delight lovers of classic mystery fiction.

After Rebecca – Excerpt
Last night I dreamt that Rebecca was alive again. She rose from the lake like some exotic creature of mythology, an undine, graceful, lithe and ravishingly beautiful. As I watched from the shore, she raised her slender arms, and the fluid allure of the water nymph became the sinuous suppleness of a sea serpent, the breathtaking smile transformed into the glittering grin of a sea witch. She glided across the glassy moonlit surface, her gleaming eyes riveted on my trembling form, as I stood paralyzed and helpless at the water’s edge. She reached out to touch me; then the frightening spectre vanished, for with the supernatural ease borne of those who wander through the land of dreams, I was rescued from her clutches and transported far from the lake.

Now I was standing on the twisted drive that wound its way through whitened beeches and stunted oaks, meandering east, then west taking me away from Manderley and offering an escape from the vengeful creature who waited for me at the shore. But as I began to walk in the direction that, somehow, in my sleep, I knew led towards the gates, the forest closed in on me. The path narrowed, overgrown with strange and frightening shrubs that I could not recognize, and the pale beeches twined their branches overhead, creating a vault above my head—and suddenly I realized that I had strayed into the Manderley of fiction; this was the wild and unkempt forest of the novel, not the estate that I knew and loved, where alders, horse chestnuts and walnut trees mingled among towering evergreens. As I tried to find my way through the skeletal branches and ugly, parasitic shrubs, I heard Max’s voice in my head reminding me that I should have dressed as Alice in Wonderland, for that’s where I belonged, in a land of make-believe.

I stumbled over a gnarled root and clutched at a stump to keep myself upright, but my heart was pounding as I forced my way along the narrowing path. Relief flooded through my soul when I spied the iron gates ahead. As I pushed my way towards them, my nightmare receded. I stepped out from the trees and the ground in front of me was clear again; the gravel restored to the drive, the grass on its verge, smooth and tended.

But then I saw her standing by the gates, the serpent smile etched on her pallid face. I was frozen with terror, unable to take even one step forward, but Rebecca opened the gates and beckoned me through.

Mesmerized by her soft voice, I tried to move towards her, but a low wall seemed to block my way. A fog was settling around me, covering the ground and causing Rebecca’s figure to become hazy and insubstantial. She appeared to be hovering in the air, and I realized that I was now looking at her through a tall, narrow window. Far below, I could see the lake, a gleaming mirror, reflecting the brilliant moonlight and a purple mackerel sky.

Someone else had moved behind me, and another voice was whispering in my ear, echoing the voice of the alien spirit beyond the window.

Then I was hurtling through space, and as I descended, the reflection of the moon became Rebecca’s face and the mackerel sky faded into darkness. From the cold, black surface of the lake below, Rebecca reached out to welcome me into her watery grave.