Max continued to be a mixture of klutz, disobedient hellion, clever trickster, spoiled brat and independent thinker.  He would race through the woods with such abandon that he regularly hit trees and almost knocked himself out. Alternately, he would pick up huge sticks and charge ahead, taking out the unwary walker at the knees. When called to come, he always looked around first to identify what it was that I didn’t want him to see. One day, he scared me silly during a walk along the power line, for he shot through a gap in the fence and headed for the freeway.  Fortunately he had the sense to stop short when he saw the whizzing cars, but I swear I gained a grey hair every day. 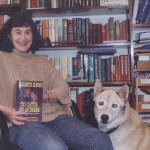 The weather was cold again, with occasional snowfall, which always seemed to stir up Max’s wild husky genes. Walks were frosty, chilly occasions, and Katie cracked us up one day by announcing that she had “goof bumps”—which we all agreed was very apt, for Max as well as for her. However, it was the kind of weather that one liked to hunker down indoors once the exercise walk was done, so I decided it was a good opportunity to get back to writing my mystery stories. I started work on a tale that would later become “Death and the Doorknockers” in my first book, To Catch an Actress. This was fun to write as it made good use of my experiences on the campaign trail.  However, Max was annoyed at being ignored and showed his displeasure by chewing up a pillow, after which he entertained himself by chasing the vacuum when I cleaned up the pile of fluff. 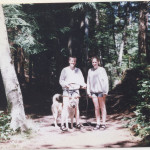 Max was a Smart Alec, and once he’d done something for the first time, he figured he knew the ropes and could call the shots. He became an ace at picking out ‘his people’ (which meant Katie, Caroline or Edna’s grandsons) in the daily parade of children pouring out of the school. He also recognized routes and knew the activities they presaged. One day, I needed the car to take the girls to the dentist, so I drove Hugh to school and took Max along for the ride. Since Hugh taught at Alpha in North Burnaby, we had to go right by Dr. Zinger’s Pet Hospital.  Max, sitting in the back, looked more and more dejected as he recognized the route, but perked up once he realized we weren’t going to the vets.  It was hilarious watching his doleful face in the rear-view mirror and seeing how it instantly reverted to macho-dog cheekiness once we drove by the dreaded destination. 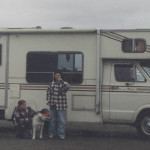 In addition to his fear of the vet, Max had developed a dread of school, and he became very glum whenever Gary Gibson appeared.  Around this time, Gary was trying to sell his motorhome, and since I had just received a sum of money for a whiplash injury, Hugh and I decided to buy it and use it for family holidays.  So one Sunday, Gary and his wife, Kathy, came over to show us the motorhome, which they had named Lisa.   Max made no bones about expressing his opinion of their presence.  He sat mulishly, head bowed, face scowling, his back turned to Gary, deliberately ignoring him for the entire visit.  However, he quite liked Kathy, and cheerfully demonstrated his Can Can for her, glowing with pride when she said how clever he was. Max looked bewildered and relieved when they left and he realized he hadn’t had a training session. He appeared to puzzle over the fact for the rest of the evening. 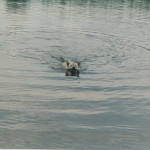 The sale of the motorhome went through, and Max was most intrigued by his new house-on-wheels. We decided to take it out to Sasamat Lake for a test outing with the girls and their friends, so we packed a picnic and set off for the day.  Max took up his position between me and Hugh as if he’d decided that the front seats were the equivalent of our armchairs at home.  He remained there and behaved with impeccable manners during the drive.  However, he was naughty on our run around the lake. He was over-excited by the new smells and flatly refused to come when called.  We finally had to leash him, though Hugh let him go at the end of the walk so he could chase the geese.  The geese were unafraid and very contemptuous of this delinquent dog.  They flew all of two feet in front of him and then sedately outswam him until he gave up and headed exhausted back to shore.  He was a tired, but happy dog that night.  It was the start of a new era for Max. Lisa was going to provide him with a lot of happy times in the future.

Next: Troubles coming in battalions.

Episode Thirty-three: Hell on Paws gets a House on Wheels