It was abundantly obvious when Max had completely recovered because he reverted to ‘Hell on Paws’ mode again.  The command, “Come”, was no longer in his vocabulary, witness the day he took off in pursuit of a spaniel, ran right out onto the road, and then played dodgems with us when we tried to catch him.  He was also into scavenging.  One day, he found a long bone in the woods.  Every effort to extract it from his jaws failed, and he gulped it down defiantly, causing me to watch him anxiously for the next few days.  However, like the Christmas light bulb, he seemed to digest it.  Max obviously had a cast-iron stomach. 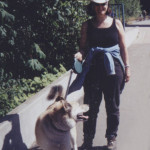 We resorted to leash walks.  As long as there were no distractions, this was fine.  Max could behave impeccably on a decorous walk to the library.  City sidewalks did not offer too many diversions.  But the woods were another story.  One day, I nearly dislocated my shoulder when a fox darted out from the clearing and ran across our path. Before you could say, “View Halloo,” Max caught the scent and lunged forward.  I could barely hold him for the rest of the walk.  The command, “Heel” had also disappeared into the ether. 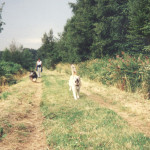 In spite of his difficult ways, Max still managed to make us laugh.  He was a terrible klutz.  On one occasion, he crashed into a tree while playing with Brandy, bit his tongue and saw stars.  He lay down and looked utterly pathetic.  He would not stir until he had been patted and reassured that he was okay.  For a tough dog, he could also be a wimp.  When we walked him in a hailstorm, his face was a picture as the ice balls bounced off his head.  Indignation personified.  Another time, he saw his shadow and nearly jumped out of his skin.  Then he spent the next few minutes trying to locate the elusive giant black hound. 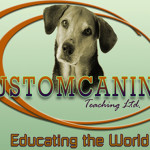 As we tossed around the idea that it was time for another call to Gary Gibson, something else happened to precipitate a visit from the trainer.  I received a call from our lawyer to tell me I was getting $15000 for whiplash injury, and what we were to spend it on impacted Max and his trainer as well.

Next:  Hell on Paws gets a House on Wheels.