It was obvious what Max’s New Year’s resolution had to be: I must not bite! However, it was also obvious that he needed help achieving that goal. On Boxing Day, our shopping expedition was to buy a promise collar for him, which tightened around the muzzle if he pulled ahead. However, when we took him for a walk at the Foreshore and tried it out, the little stinker managed to get it off in no time. Home for a lengthy talk with trainer, Gary Gibson, the result of which was that Max had to wear a muzzle when out and about.

The next day, we went to Tisol to fit him for a muzzle and a harness. The muzzle was a large cage variety which allowed him lots of room and breathing space, rather than the wrap-around Velcro variety. Max wasn’t at all happy about the procedure, but the girls were in the store were very nice with him and he was at least co-operative.  However, we discovered that he also had the potential to be a shoplifter since the whole time we were there, he was attempting to pilfer the snacks off the shelves.  Once we’d finished choosing his gear, we allowed him to take one package of treats and we added it to the bill.  We let him trot out of the store with his goodies in his mouth, so he was happy again and forgave us the indignity of the earlier fitting. This mood only lasted until we were home, though, since we went out to meet Edna and tested Max’s muzzle during the walk.  Max worked non-stop to get the muzzle off but finally gave up and, instead, used it like a battering ram and had fun sideswiping Brandy. 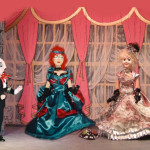 A few days later, Max was beginning to wear a bald spot on his nose from chafing at the muzzle.  Mind you, he was behaving a lot better, so maybe Gary’s strategy to make him understand who was boss seemed to be working. The rest of the day was taken up with preparation for our Die Fledermaus, the sequel, a very funny ten-minute show set to the overture of Die Fledermaus. This had been prepared for our New Year’s Eve party, not as a gig for hire, although years later, when the Burnaby Village Museum initiated free admissions over Christmas and needed short shows to accommodate the swelling crowds, I redid the soundtrack and we began using it as a public show. To this day, it is a great hit with the people that come by and see it.

However, that year it was performed strictly for fun, with me and the children doing all the roles. Mum and Dad joined us for the party, and what fun it was. A great crowd of friends, family and neighbours took part. The show went well, the buffet was delicious, and a good time was had by all. Max, needless to say, spent most of the evening in solitary confinement in our bedroom, but like a king holding court, he had sporadic visits from various members of his inner circle, not to mention the odd treat snuck upstairs by the kids. 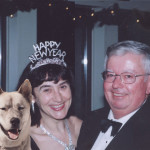 Since Mum and Dad were staying over and sleeping in our room, Hugh and I crawled into the bunk beds in the guest room at 2:00am, watched by a rather puzzled Max who’d been brought down to sleep with us. He couldn’t figure out why we were not in our own room, or why there were assorted children sleeping on sofas and air mattresses in every corner of the house. However, he settled down happily once he saw that we were going to sleep. Max had seen out the old year with no further incidents and made it into the new. My goal was to ensure that he was protected from making mistakes in the future. The New Year held challenges for us both.