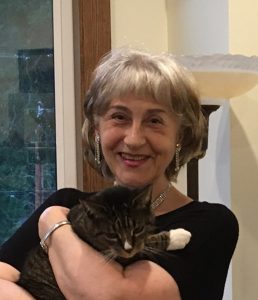 There we were, forced to spend Christmas apart from family and friends, our bubble consisting of me, Hugh and Thomasina Bug. As we toasted each other over the dinner table, elegantly set with the good china for our turkey dinner for two, alongside a third placemat on the floor set with the good china for a Fancy Feast turkey and giblets dinner for one, we observed the fact that Christmas Present had been notably more serene than many Christmases Past. Our zoom meetings with our daughters and their families had been enjoyable; our present opening had been considerably less messy than usual; our turkey-breast dinner had been far less arduous than cooking for a crowd and had allowed us ample time to put our feet up, relax by the fire, and read our books.

Over dinner, Hugh and I gleefully reminisced about some of the more memorable Christmases of previous years. There was the year that Max, our not-so-ho-hum husky bit Katie’s godfather and caused the evening to end with a hospital visit. Another year, my father flew into a rage because dinner was held up when my brother and his wife spent the day visiting friends and didn’t dawdle in until late-afternoon. That was a particularly memorable occasion for me as it was the Christmas I’d brought my future husband home to meet my family. Amazingly enough, Hugh still married me, and very sweetly confided that he was used to these sort of ding-dongs. I thought he was just being kind, but a few years later, I learned the truth of his words when his mother announced that she would not be attending Christmas dinner if we invited Hugh’s Aunt Doris. Thus Christmas Day was spent in a drama of negotiations as Hugh’s sister tried to make her mother stay for dinner, after discovering that we had ignored her edict and that Auntie was enjoying a glass of sherry in the living room. No, Christmas was not always a time of peace and goodwill. Our daughters’ godmother, a charming, highly educated woman of First Nations heritage always enjoyed political sparring with my charming, highly educated father of British heritage, but after the third drink, the atmosphere deteriorated. The moment I heard the word, Colonialism, it was time to escape to the kitchen and lie low.

I had my gripes too. The thing that rankled me the most about hosting Christmas dinner was the fact that the guests inevitably arrived early in the afternoon; drank and socialized all day while I slogged through the cooking; ate heartily once dinner was served; and continued to drink and socialize while I slogged through clean-up. Then, the moment I took off my apron, prettied myself up and returned to the living room, ready to party, they generally all stood up and said it was time to leave.

Yes, COVID, for all its horrors, has definitely changed the format for Christmas Present. No carol services, no family gatherings, no parties, but we’ve also avoided the months of debate over whose turn it is to host and which set of parents are to visit which set of kids. We’ve avoided the battle of who goes where, because no one is going anywhere. And instead of seeing our girls, their mates and our grandchildren on separate days and travelling miles to do it, we saw them all and chattered with them, courtesy of technology, as we cooked dinner on Christmas Day. And after dinner, we put our feet up, tucked Thomasina Bug in our laps, and watched a fabulous production of Holiday Inn taped from PBS. Christmas Present was really not so bad after all.