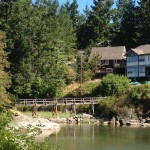 Our family has many happy memories of the Sundowner Inn on Hospital Bay.  Therefore, it’s hardly surprising that I used this Pender Harbour locale for a story in my latest book.  The impetus for the tale came from Patty Jackson, who for many years worked at the inn.  She told me of a window that would never stay closed.  No matter how many times she returned to the room and shut the window, next time she looked it was open again.

Patty’s story dated back to a tragic accident that occurred in the fifties.  At that time, the building was still a hospital and the autopsy of the woman who died was performed in room 21.  From then on, the window in room 21 continued to stay mysteriously open.  Paranormal groups investigated and declared there was a presence.  Rumours of a ghost abounded.  How could I resist?  This was a plot that had to be explored.  So I wrote “The Window in Room 21”, renaming the heritage hotel and the bays where it was located, but the inspiration for the story was the Sundowner  Inn. 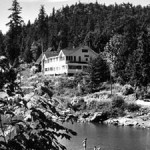 The Sundowner Inn began its days as St. Mary’s Hospital.  A hospital was sorely needed on the Coast, for in the early days, very little medical help was available.  Betty Keller and Rosella Leslie’s history of the Coast, Bright Seas, Pioneer Spirits, tells of an era when residents had to rely on the services of a midwife, or a doctor who was practising illegally, and when loggers sometimes died of their injuries while waiting for the steamer to transport them to Vancouver.

The story of the community effort to get the hospital is quite a yarn in itself.  The first attempt failed when the buildings being towed to the Harbour sank during a storm in Johnstone Strait.  The next attempt ran afoul over boundary issues.  These were finally resolved and the 12-bed hospital was opened on August 16, 1930 with the Lieutenant-Governor officiating at the ceremony.  Ten years later, a chapel was built on the end of the hospital.  It was consecrated in 1940 and was used for local weddings and christenings during the lifetime of the hospital.  Then, in 1964, a new hospital was built in Sechelt and the original St. Mary’s was closed.

However, the lovely heritage building remained, and simply changed its function.  It was transformed into the Sundowner Inn and became the focus of many local festivals and events.  Over the years, the inn has had several owners, and when we first discovered it in the 1990s, there was also a museum and restaurant on site.   We enjoyed meals and special events with family and friends there, but sadly, in the next few years, the building deteriorated, and ultimately, the inn was closed.  Then, in 2006, Kusum Irene Jain and Tom Cunningham purchased the inn and a dramatic restoration project began.  They reopened the inn in 2013 and made the  suites available for guests.  Each room is different, having a unique charm of its own, but all share the spectacular water views and the fresh sea breezes.

The former restaurant has been transformed to a dazzling art gallery where the works of local artists are on display.  More than a hundred wonderful pieces are exhibited, making this one of the largest fine-art galleries on the Coast.    A gleaming wooden table made from stadium bleachers—a work of art in itself—holds books by local authors.  More paintings line the hallways, along with photographs from the early days of the hospital.  Tom and Kusum are charming and friendly hosts, committed to ensuring that their guests enjoy their stay.  They refer to Pender Harbour as the Venice of the North, an apt title, given the wealth of waterways and lakes for their guests to explore.  They treat the Sundowner Inn as one big home whose doors are always wide open, and they facilitate events and tours to make sure their guests enjoy all the benefits this lovely area has to offer.  To read more about the inn, you can visit their website at http://www.sundowner-inn.com

Tom and Kusum are determined to restore the original character of the building.  They are continuing the upgrades, both inside and out, and the next step will be the restoration of the chapel, along with plans to include a museum and an event/performance space.  It’s wonderful to see the lovely old building being returned to it’s former glory, and hopefully, the resident ghosts are enjoying the refurbishments too.  Certainly, every time I walk by, I look up to see if that window in room 21 is open.  And often as not, it is.

Anne hung up her coat and started up the stairs, buoyed by the blast of heat that billowed after her from the main floor.  However, as she approached the landing, she felt a chill in the air.  The cold increased as she reached the top of the stairs.  She moved towards the first room of the second floor.  The icy draft was coming from under the door.

Krypton whimpered and he flattened his ears against his head.  Feeling apprehensive, Anne opened the door.  The room was dark and freezing cold.  She immediately saw the reason why.  The window had been opened wide and the linen curtains undulated gently in the wintry breeze that drifted in from the sea.

How strange, she thought.  I’m sure I closed all the windows before I went out.  She crossed the room quickly.  Without looking outside, she shut and latched the window.  Then she returned to the welcome heat of the hall.  But it was several hours before she grew warm again.

The Window in Room 21 – Memories of the Sundowner Inn