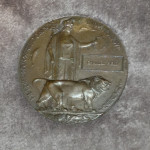 On Remembrance Day, I have many people to remember, not only family members who served in the armed forces, but also a number of wonderful friends, long since passed on, that I knew during my years as a volunteer at the George Derby War Veterans’ hospital.  However, the one that always comes first to mind is Charles Field, the grandfather I never met, and with him, Emma Field, the grandmother he left behind.

Charles Field was the batman to Captain Hanbury, a member of the family who had started the Allen & Hanbury pharmaceutical company.  The story, as my mother told it, was that the two became good friends, and that the captain always told Charlie that if they both came through, he would see him right after the war.  The two men survived together throughout the four years of the War.  However, during the final Allied offensive in November 1918, both were fatally shot by a sniper towards the end of the battle.

My grandmother, Emma Field, or Pem, as the family called her, was deeply grieved over the loss of her Charlie, who was reputed to be a real sweetheart, but like most war widows, she had to struggle on alone.  She got a job in a factory, and my mother and uncle became latchkey children.  She was also the oldest of five children herself, and in spite of her widowhood, ended up assuming responsibility for helping her siblings and caring for elderly parents.

Many years and another World War later, my Nan continued to support the family.  My father, who was in the Merchant Navy, married my mother in 1943, so they lived with Nan throughout the war.  When my mother was expecting my brother, she complained that she had not known what was more dangerous:  Hitler’s bombs or Nan hurling her under the table whenever the sirens went off.   My mother also used to relish the tale of how Nan had kept an ‘emergency’ bottle of brandy all through the war, refusing all requests from those who wanted to sample it, only to have it stolen by a burglar who broke in after it was all over.

Our family continued to live with Nan after the war, a situation she had not invited, but had simply put up with in order to help my parents.  I remember her as a rather formidable lady who liked her Guinness, had strict rules about not annoying her in her rooms, but who also took my brother and myself on lots of interesting outings.   Then, in 1957, my father whisked us away to Canada, and she lost the company of her only grandchildren, though she continued to send us our British comics and write to us during the remainder of her life. 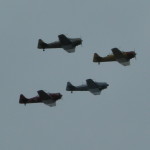 It was only after I’d grown up that I started to appreciate how much heartache she had endured, and how tough she was to maintain her resilient get-on-with-it spirit, no matter what was happening around her.  Needless to say, I was delighted when a few years ago, an aunt passed on to me copies of a batch of letters that had been written by ‘Pem’ to her cousin in Australia.   I was especially fascinated to see that one of these was dated 1941.  Some of this is printed below:  It’s a picture of Wartime England from the middle-aged widow’s perspective.  Sorry I never got to meet you, Charlie Field, but you’d have been proud of the lady you left behind.

Received your letter today…….  I thought perhaps the mail had gone down.  As you know, Mum passed away the 12th of June.  She had been very ill all winter.  In fact every winter for the last six years she had to stay in her room because of her chest, but the September war was declared, on that same night we had an air raid warning.  We thought we were going to be deluged with bombs, and she never really got over the shock.  . . . .   On Oct. 25th she had a stroke.

I nursed her for six months, and she seemed to be getting on nicely.  Then the posters started about the possible invasion, and the doctor advised me to try and get her away.  If it happened, she would not stand the strain.  Her friend Mrs. Coburn had moved from Highbury to Ealing, so I took her there while I looked for a house; I had just got this house and was going up to see her when I had the wire asking me to come.  But she did not know me.  She is buried with Dad at Sutton.   Perhaps it is as well she was taken before things got as bad as they are.  You say the Londoners can take it.  You ought to see what they have taken.  Do you remember where Rose lived?  It is dreadful round there.  Windsor Street’s small houses, not one is standing.  The turning is like a waste land.  Dean Street . . . not a soul is living there.  The homes just smashed up.  In one turning, there are five pianos or parts of them in the debris of the different homes.  Hitler’s military objective, Highbury, got it dreadful this week.  It is appalling the women and children that have been killed.  Also the city has been badly bombed, in some parts just ruins. . . . .  Do you remember the London Hotel at the corner of Tylers Avenue.  That was hit the other week and a lot of civilians killed.

My daughter does nursing all night once a week in a shelter in the city.  I do fire watching once a week.  I have a tin hat and a whistle to blow should an incendiary bomb drop in our turning.  We do different turns all through the night starting at 10 pm until 6 am.  . . . . . . . One thing we have to be thankful for is that we have not been really short of food.  We don’t get a lot of meat, but the fat ration is very generous really.  We have plenty of veg, bread and flour and if people spend a bit more time at their stoves, they can make some real good meals.  It means a little more trouble but it is worth it and all helps to win the war, besides helping to keep the nation fit. . . . .

Rents went up very high after the last war, but food and clothes got very reasonable the last ten years.  Now we are at war again and everything is sky high again, but why worry?  Just live from day to day, get what pleasure you can, and try to be just to all.  I hope this reaches you.  Wishing you and yours all the best.

2 thoughts on “Remembering Charlie and Emma”