The Devil Gets His Due and Other Mystery Stories, as with my other books, comes with a disclaimer that the characters in the various tales are entirely a product of my imagination. However, unlike my other books, Devil has one notable exception where fact meets fiction, and what fun that was to write.

Anne Kent in “The House of Once Before” is the one exception and her character is based on National Post columnist, Barbara Kay, who has encouraged my writing ever since I sent out review copies of my first book. After reading To Catch an Actress, Barbara contacted me to say how much she had enjoyed it and gave me permission to quote her endorsements. She continued to be supportive after my second book was published, and subsequently, when I was visiting Montreal, we arranged to meet.

We discussed mystery writing—Barbara also had a manuscript in the works, later to be published as the intriguing mystery novel, A Three-Day Event—and when I told her my intention to use Montreal as a setting for a future story, she laughed and asked if my outspoken protagonist, Bertram Beary, was going to meet an equally outspoken newspaper columnist on his travels.  I took this comment as lightly as Barbara had made it, but after I returned to Vancouver, we kept in touch.

Subsequently, I wrote two more books and after The Beacon and Other Mystery Stories came out, Barbara gave me another wonderful boost when she featured my series in her column. A couple of years later, Barbara and her husband were downsizing, and she wrote a column about their new home, which happened to be a house that she had visited and loved in her youth.  The next time we were in touch, I quipped that her move would make a great subject for a mystery story. She reminded me that we had joked about Beary meeting an outspoken lady columnist and suggested that this was my chance to make it happen. 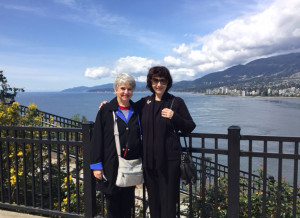 And so “The House of Once Before” was born. Naturally, Barbara’s new home had an imaginary set of characters as the first occupants, for these provided the mystery that Anne Kent solved. It was great fun to create a literary mystery for a female protagonist who, like Bertram Beary, never fears to say what she thinks and refuses to hide behind the veil of political correctness. Thank you, Barbara, for stepping into my story and making it special.

[box] The photo above was taken at Prospect Point during Barbara’s recent visit to Vancouver.[/box]

Oops! Do I dare admit a link between one of my characters and a real-life person!