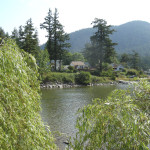 Hundreds of years before the Europeans arrived, the Sechelt First Nations people roamed the Sunshine Coast of B.C.  Visitors to Pender Harbour will immediately notice Mount Daniel and Pender Hill overlooking the bay, and it does not take much leap of imagination to visualize how the early inhabitants used the peaks as lookouts to see who might be approaching their villages.  The first European to arrive was Captain George Vancouver who discovered the bay of Pender Harbour when he charted the coastline of British Columbia in 1792.  However, it was almost a hundred years later before European settlement began.  But from 1880 on, after Charlie Irvine claimed Irving’s Landing on the north end of the harbour, stores and hotels started to appear, money was made from logging and fish-processing, and although the area was only accessible by water, it soon became a popular summer resort, a role it still holds today.  Betty C. Keller and Rosella M. Leslie’s absorbing book, Bright Seas, Pioneer Spirits, tells the fascinating story of the Sunshine Coast, and it is well worth the read for those who love local history. 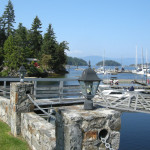 My husband and I love the Sunshine Coast.  We have been frequent visitors there for many years, at first staying on the Madeira Park side, and in recent years, in our cottage in Garden Bay.  Hugh’s parents moved to the Harbour after his father retired, at first living on their yacht, the Adamastor, and later moving into Madeira Park Estates.  We visited them often, at first as a young married couple, and later with our children who have wonderful memories of their summer holidays in Pender Harbour.  So, naturally, the beautiful coast settings have provided a great deal of inspiration for my stories. 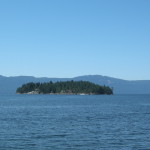 My first play was actually written during a stay on the Sunshine Coast.  Hugh particularly liked one of my stories and had suggested that I dramatize it.  The story was set in an apartment in downtown Vancouver and the mystery was centred around theatrical characters.  However, since I was writing by the sea, I restructured the piece to make use of the picturesque surroundings.  So “To Catch an Actress” became Casting for Murder, a three-act mystery play set on an island near Pender Harbour.  Furthermore, the term, casting, now referred to fishermen as well as actors.  It was a wise decision.  The isolation of the island and the atmospheric sound effects from the storm at sea add much to the effectiveness of the play.

The Sunshine Coast also features in my mystery stories.  One of my characters lives in a thinly disguised Garden Bay, with a home located right opposite the lagoon.  I have played with the setting, adapting the geography and changing the names of the bays and the buildings, since I’ve filled the area with fictitious characters.  However, anyone who lives on the Coast would recognize the location if they read “Through a Lagoon Darkly”.  I have never actually found a body in the lagoon, and hope I never will, but that moody, ever-changing circle of water certainly provides a dramatic opening for my story. 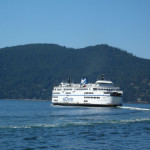 A ferry trip to the Coast prompted a story for my third book, A Black Tie Affair.  Once, when we were waiting to disembark, an announcement came over the PA to say that a dog had been left in the pet enclosure, and would the owner please come to claim it.  This was very puzzling.  Why would anyone abandon a dog on the ferry?  Did the owner fall overboard or was he pushed?   By the time I’d finished theorising, “A Grim Ferry Tale” was born. 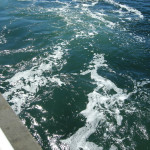 Ferries are great settings for stories.  For my third book The Beacon, I wrote a story called “Reflections on an Old Queen”.  It was inspired by a crossing on the Queen of Tsawwassen, which has since been decommissioned, but it had spent its last days on the Earl’s Cove to Saltery Bay run.  I was fascinated by the boat because it seemed so familiar, yet I’d never made that crossing before.  Hugh and I explored the ship and when we talked with the crew, they told us that it had spent its early days on the Victoria run.  Right away we realized why the boat was familiar.  We had been on her before.  We had made a crossing back in its heyday when the old dining room had been a picture of elegance, complete with white tablecloths and place settings, and we’d sat by the window, watching the sunset over the ocean as we enjoyed our evening meal.

The history of the boat suggested an intriguing plot.  Richard, the detective, is on holiday.  He’s heading for a fishing trip on the island, but on the ferry, he meets a beautiful and mysterious woman who seems to know her way around the boat even though she says she’s never travelled the route before.  Richard finds her fascinating, and she soon ends up in his arms, but it’s hardly a romantic moment.  She’s screaming hysterically because she has witnessed a murder.  A lot of what happens subsequently stems from things that happened many years before on the Victoria run. 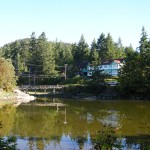 The Coast is rich with interesting characters, gorgeous settings and fascinating bits of folklore.  The next two Beary manuscripts already contain four stories set in this glorious part of British Columbia, and my most recent book, The Agatha Principle, features a story inspired by the historic Sundowner Inn, though that spot deserves a blog of its own.  Every time I travel to the Sequelt Peninsula, I find more to write about.  A lovely spot, well worth a visit.  I hope I can continue to enjoy many more years of inspiration from the Sunshine Coast.

Inspirations from the Sunshine Coast

2 thoughts on “Inspirations from the Sunshine Coast”