In spite of the decorating and the festive songs tinkling from the radio, I could not come up with a concept for my Christmas song.  I had written a good script, which included three Pelham animal marionettes—a cat, a poodle and a dragon—as well as several other antique puppets.  But I needed that feature song to drive the middle of the show.  It was so frustrating, but no matter how hard I tried, I drew a blank. 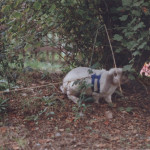 My own creative flow might have dried up, but I was surrounded by enchanting tales everywhere I went.  One of these was from my friend, Edna, who explained how her lop-eared rabbit had acquired its name.  I was aware that Edna had a rabbit named CB, though for all I knew, it could have been a nautical moniker and spelled Seabee.  However, during an early-December walk, Edna explained that CB stood for Christmas Bunny.  The reason for this name was quite the tear-jerker.  The previous year, Edna and Brandy had been walking in the woods on Christmas Day, and Brandy had become fascinated by a mound of snow.  When Edna investigated, it proved to be a shivering, abandoned lop-eared rabbit, freezing cold and not long for this world if he hadn’t been discovered by this caring pair.  So the bunny was taken home, thawed, and nursed back to the land of the living.  Given the miracle of his salvation and the day it occurred, he was christened Christmas Bunny.

Well, who could compete with a story like that?  I gave up trying and concentrated on the practicalities of shopping, baking and rehearsing our shows.  We had several gigs for December.  One of these was a birthday-party show, booked by a lovely family that attended our church.  The Claydons were cheerful and patient, in spite of the fact that we had problems setting up in time.  However, our performance got underway, albeit with us frazzled and roasting, since there was a radiator belching out heat beside us.  In spite of our discomfort, the show went well until the finale when we did the unthinkable – We Dropped a Puppet!!!  Such shame, but the Claydons didn’t appear to mind.  I vaguely recall hoots of laughter and someone calling out, “There goes one!”  Fortunately, they considered it a comedy turn.  In hindsight, I quail at the thought of the primitive nature of those early shows.  What forgiving audiences we had!

A gig of a different colour was the booking to perform Babes in the Wood for Scotia MacLeod in their high-rise downtown office.  Having hauled our equipment up in a service elevator that kept getting stuck, we found ourselves performing in the lobby, opposite the front desk, where we competed with ringing phones, peripatetic couriers and roving stock-brokers.  The show was clearly the finale to the staff Christmas luncheon and was designed as What-to-do-with-the-wives-and-children-while-the-husbands-put-in-another-two-hours-at-the-office.  Needless to say, our audience sat as if press-ganged and had as much animation as a row of sausage rolls.  The adults looked bored before we started, and the children were so robotically well-behaved it was positively eerie, but we soldiered on.  The show continued smoothly, except for the Sheriff losing a string early on and proceeding to look tipsy for the rest of the performance.  By the time we’d packed up and tackled the temperamental elevator once more, everyone in the family had as much Ho Ho Ho in them as Ebenezer Scrooge.

All this pressure took its toll as December wore on.  Katie became very naughty during her church concert.  She rattled off her lines as if she was chanting her ABC’s, and tossed Baby Jesus’ gift down like a discarded bus ticket.  Hugh assessed the situation and suggested that some festive outings were in order to restore our Christmas spirit.  And so, one evening, while Caroline was at a skating party, the rest of us went to Ioco to see the Carol Ships.  Although we had intended to watch from the clubhouse, Hugh decided it would be more fun to go out on the boat.  Of course, we had not prepared for this, so needless to say, we froze.  Having chugged around the bay for half an hour, the only result was borderline hypothermia.  We saw plenty of marker ships coming out of Reed point, but no carol ships anywhere.  Finally, we gave up and came in.  Then, the minute we walked off the dock, the first Carol ship glided around the point.  So we watched from the clubhouse as originally planned, and I made Max do a long down on my feet while we saw the flotilla pass by.  That solid husky torso made a fabulous foot-warmer.

Once we were all home, Hugh made a hot rum to thaw me out.  I decided to enjoy it upstairs, lolling on the couch in our bedroom.  Max, equally exhausted by the long day, was sprawled in the middle of the carpet, having been too tired to make it to his usual corner.  A totally ho-hum husky, determined not to stir unless something really exciting got his attention.

Suddenly, out of nowhere, a set of lyrics floated into my mind:

Max, the Ho Hum Husky, could run faster than the rest,
But he never made the effort unless put unto the test,
Unless he sensed another team gaining on his tail,
He’d slow down and move at a pace more suited to a snail.

Bugger the poodle, I thought.  We can do better than that.

“Hugh!”  I called down the stairs.  “Do you think you could make a puppet of Max!”

Episode Twenty-seven: How Max, the Ho Hum Husky was born.