Poor Max was still in a lot of pain, so he was very restless in the night—not a good thing since we were all exhausted from the New Year’s Eve party.  The girls were able to flop on the couch and vegetate with movies, but Hugh and I had to clear the debris and prepare New Year’s Day dinner for my parents.  Max felt sufficiently pathetic that he was happy to have doting grandparents visit and shower him with sympathy.  Since my parents settled to watch videos with the girls, Hugh and I slipped out for a walk and retraced our steps, trying to find what it was that had injured Max so badly.  It turned out to be a rusted fan-belt shield from an old vehicle, half buried in leaves and dirt, but with lethal edges projecting upwards.  Hugh hung the thing up on a tree so that it couldn’t harm any other creatures, and we plodded home to finish making dinner.  When we passed Edna’s house, Brandy recognized us and barked until Dick and Edna appeared and let her out.  She was pleased to see us but puzzled not to see Max.  Edna gave me a chew bone to take home for the invalid.

By bedtime, Max had perked up a bit.  He’d enjoyed being fussed over by Mum and Dad, and he was patient putting up with his time-consuming bedtime routine.  The next morning he seemed much more cheerful.  He gulped down his pill, well-wrapped in corned beef, and was very accommodating with his plastic sock, obligingly putting his foot up so that I could tie it on.  However, once back inside, he nipped at it impatiently as if to say, “Get this thing off me!”  This was a precursor of things to come.  Once he was pain-free, Max proved to be a terrible invalid.  The diary entries said it all:

January 4:  Spent fifteen minutes in the garden in the rain trying to get Max to go to the loo—he didn’t oblige—and a further ten minutes inside unsuccessfully trying to get him to take his pills.  Needless to say, we were late at the Vet.  Dr. Zinger agreed reluctantly to change the dressing without putting Max under, so I held the biting end while Dr. Zinger worked on the paw.  Managed very well; however, as we got Max down, he banged his paw and it started to bleed, so we had to start all over again.  This time Max was cross and vocal.  Afterwards, he got even by eating a piece of gauze on the floor.

January 5:  When it was time for Kate to go to school, Max hopped about and looked so eager that I decided to let him trot down the block.  He took off at speed on his three good legs – the fourth pointing up in front like a little lance.  He was so excited at having a walk that we got right round into the lane then came back through the garden. The only way I could make him rest the paw was to insist on a long down.

January 6:  Walked Kate partway to school.  Max cried when we parted from Kate.  He wanted to keep going in the worst way, but I made him turn back.  The whole body language spelled defiance, and when he saw a squirrel in the lane, he lunged ahead on three legs, the gammy one pointing forwards as if he were jousting in the lists.

January 7:  Gave Max his turn round the block after we saw Kate off at the corner.  Then home for housework, after which I had coffee and Max pouted through a long down.  He cheered up after lunch, when we walked Kate partway back to school and we met both the postmen who had made friends with him.  More pats, more sympathy.  How he lapped it up, doing his Sarah Bernhardt routine with the pathetic raised paw.

January 8:  Hugh, Kate and I took Max to the Vet.  We were greeted by a jolly nurse whom we hadn’t met before.  She beamed and asked:  “Is this the infamous Max?”  It turned out she’d been on duty when I phoned to ask about the light bulb he’d eaten.  She added:  “Does he light up when you plug him in?”  Max was very good while his bandage was changed and afterwards he let Dr. Zinger pat him and ate a Christmas cookie provided by the nurse.  The nurse had read about the puppets and was delighted to hear we were planning to build a show around a Max Marionette.  She asked if the puppet Max was going to eat a light bulb too.

January 9:  Girls were  sick so we skipped church.  Hugh and I gave Max his loop round the block and then, feeling guilty, left him with the girls and set off for a walk at the Foreshore.  Max got his revenge by chewing off half his new bandage.

January 11:  Both girls sick at home, so I was distracted. Max entertained himself by chewing his bandage right off.  I had to make an extra trip to the vet to get the bandage redone (another $20), plus rent a huge collar to stop him from chewing.  Max was pleased with himself for forcing an outing and he seemed quite happy to have another visit to Dr. Zinger, but his face was a sight when the collar went on.  This was definitely not in the plan.  For the rest of the day, he sulked, while Caroline, Katie and Hugh went into gales of laughter every time they looked at him.

January 12:  Max is using his collar like a cross between a lacrosse racquet, a shield and a battering ram.  He had a riotous play with his chew toy, scooping it up and tossing it into the air. 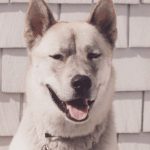 The day the bandage came off was a relief for everyone.  Hugh and Kate were home sick, so I left them watching news of the Los Angeles earthquake and took Max to the Vet, where, to his joy, he was relieved of both bandage and collar.  He shook hands with Dr. Zinger and bounced out exuberantly.  I took him to city hall on my way home, and while I picked up my agenda, he was much admired and sympathized over.  Then I stopped at the top of the park and walked him around the top path.  When he got home he was very happy and he lay at our feet while we had coffee, checking his foot and seeming relieved that everything was there.  Counting pads, as Hugh said:  “One, two….more than two….more than two.”  Max didn’t care how much we laughed and teased him.  He was one very happy dog that day.