The beginning of 1996 was memorable because of the massive amount of snow, and Max, with his husky genes, loved it. He and Brandy had wonderful romps in the woods. One day, we came across an old mattress that someone had abandoned in the bush. Max fell in love with this discarded piece of bedding, and on every walk he would attack it with great abandon, sending snow and fluff flying everywhere. 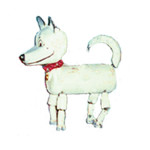 Much as the dogs loved the snow, it was a big nuisance for me. I had scheduled more voice-over auditions in January, but several times I had to cancel because of the condition of the roads.  Caroline had valiantly recorded Max’s voice for the Christmas show, and had done the part extremely well. However, even she felt that Max ought to have a male voice, so the search was on. During my headhunting for singers, I called Jim Keary and he advised me to try Dwayne Campbell, another long-time member of Vagabond Players. I knew that Dwayne was a good actor and director, but didn’t realize that he could sing. Jim informed me that Dwayne had a very nice light tenor voice, so I followed through, and to my delight, Dwayne was interested in trying for the part.

When Dwayne came to the house to audition, Max glowered balefully. Dwayne was tall, and Max was always suspicious of large males. Dwayne was equally reserved about Max. He took one look at the expression on Max’s face and carefully negotiated his way around him. We headed up to my studio and locked Max out, since he had an annoying habit of shaking and making his chain rattle right in the middle of a take. Then we proceeded to try some pieces of music.

Dwayne’s singing voice was delightful. It was clear and melodious, with a very pleasing tone. I was greatly impressed and was on the verge of saying that I’d rather use him in roles that involved more lyrical numbers.  Max, after all, had patter songs or story songs—fun stuff, but hardly requiring such a musical tenor.  However, when Dwayne read some dialogue with me, it was instantly apparent that he had to play Max. His delivery of the lines caught my cheeky dog’s attitude to perfection.  There was no question that I had found Max’s voice.

Thus began a partnership that spanned many years and many shows. Dwayne aced all of Max’s roles, but he also took other more lyric parts. I was delighted to have someone who could record melodic and semi-operatic pieces with me—not to mention chorus parts, for Dwayne and I recorded the various lines into my eight-track and then I duplicated them until I built up a full-bodied chorus. We became so ambitious that we even managed some of the chorus music from Faust for the ‘Phantom’ Halloween show.

Still, it was Dwayne’s work as Max that put him on the map with our audiences. And what fun we had during those recording sessions. Dwayne cheerfully put up with all the witticisms from the other recording artists—if he was on a break and we needed him, some bright spark would bellow down the stairs, “Dwayne, Come!”—because he knew perfectly well that his voice-over was the one that everyone loved best. Max was the only puppet that ever received applause on his entrance. Max was the star and Max had found his voice.