Come October, the fall-winter puppet-show marathon started again. Max took this in his stride. As long as he had his morning walk with me, Edna and Brandy, or Hugh and the girls on the weekend, he didn’t care what we did with the rest of the day. However, in spite of his burgeoning fame as Max, the Ho Hum Husky, he continued to be very un-ho-hum whenever he felt threatened. 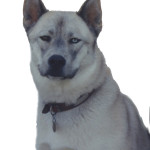 One Saturday, after a walk at the Foreshore, he cracked up the whole family during the drive home. As usual, he was riding in the back of the Jeep and none of us were paying him any attention, but suddenly we heard him growling. We all looked round to see him standing up and facing the back window. His hackles were up, and a moment later, the growls erupted into furious barks. The cause was immediately apparent. A Harley Davidson motorbike was on our tail, the rider decked out in full leather gear with a large round helmet. Obviously, Max thought we were being chased by a monster. The girls were in convulsions, but Max was oblivious to our laughter. He continued his barrage of woofs and snarls until the bike veered off onto a side street. At that point, Max turned round, sat down smugly and eyed us all as if to say: “There, I took care of him.” 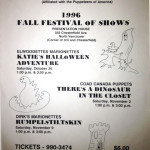 It was another season cram-full of private gigs: school shows, daycares, hospitals, senior homes, office parties, not to mention our usual booking at the Burnaby Village Museum. We also had more public events and Max was certainly lucky that we had the motorhome that fall. We had quite a few bookings that entailed long days out, so he was able to come along and stay in his ‘home-from-home’ during the set up and performances, yet visit with us and enjoy walks in between. Halloween brought us a public show at Presentation House as part of the Vancouver Guild of Puppetry Festival. In November, we repeated our Babes experiment, this time booking a hall in Fort Langley so that we could bring the show to a different audience. Then there was the mammoth day out at Pender Harbour since the Lions’ Club had once again booked us to bring up our Christmas show. 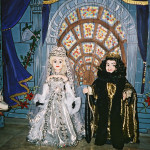 The raft of repeat bookings in December of that year had made me realize that we were not going to get very far if we only had one Christmas show. Therefore, I had worked throughout the year to create a new seasonal show for Max. This year’s offering was Ye Olde Ho Humme Christmas, later to be expanded and developed into King John’s Christmas for a run at Vagabond Players. The latter title is, of course, also the title of a beloved childhood poem by A.A.Milne and it was that poem that inspired the idea for the show. King John, in our puppet show, was not hankering after a red rubber ball, but had turned against Christmas because “In days of yore when he was four” he had asked Santa for a little wooden toy soldier and Santa had failed to comply. As a result, the king was plotting to destroy Santa, but naturally, the plot was foiled through the efforts of Sir Max, the Ho Hum and his friend, Maid Brandy. The show was great fun, and enthusiastically received by local and Coast audiences alike. Even after we’d finished the paid gigs, there was fun with the puppets as we set up the theatre in the basement and gave shows for our various Christmas visitors.

That year, we had another White Christmas, although Christmas Day was quieter than the previous year. Mum and Dad were present, but we all missed the Aussies. However, we had many visitors for the three days after Christmas, so there was lots of opportunity for games and seasonal fun. The girls particularly enjoyed Boxing Day when Hugh’s nephews came over with their children. We made them bags of popcorn and performed the show, after which the girls showed their cousins how to work the puppets. However, by the 29th, visiting came to a halt. There was so much snow that the B.C. Government declared an emergency. People were stranded on the highway and in some cases, had to shelter in barns all night. Hugh was worried that the Optimist would sink under the weight of the snow, so he and Caroline ventured out to Ioco in the Jeep and shovelled off the decks. Thank goodness for four-wheel drive. But the snow put the finish on much more activity for the rest of the year, and it was the first year in a long time that we did not bother with a New Year’s party. Still, we were tired and happy to stay home, read books and do puzzles. And Max was the happiest of all. Long walks in the snow, fun with snowballs while we shoveled the drive, and captive people who stayed home all the time. A perfect way for puppet dog to round up the year.