Max soon got used to life on the island, but once the novelty wore off, his behaviour began to deteriorate again. One morning, Hugh and I took him for a walk to Ganges.  The trip down was delightful, as was the stay in town. We ate breakfast at Shelly’s overlooking the water.  Max, utterly content, sat under the table and ate tidbits.  But when we walked back, this time exploring a different route, Max took off after a deer and left us bellowing and panicking for fifteen minutes until he finally crashed back, so exhausted he could hardly stand.  It was a slow walk home, with Max alternately laying down, vomiting or suffering from diarrhea.  He was so worn out, we actually thought he might have a heart attack.  We stopped at the end of Dean road to request a bowl of water from the home of one of Dennis’s friends, and we remained in the shade until our naughty dog was ready to proceed. Max was still wobbly after a drink and a rest, but at least we were able to make it home.

The rest of the day was more serene. After a short shopping trip in town, we set out on the Optimist to pick up Hugh’s crab trap.  The result was one giant starfish and five undersized crabs, so back they all went.  Once back on shore, we drove to Stowell Lake for a swim; then returned to find there was a message from Josie to say she was on her way home and would see us in the morning. In the night, there was a bad storm, with the rain thundering on the metal roof of the motorhome, but the morning was clear and it was lovely to see Josie and enjoy morning coffee together. 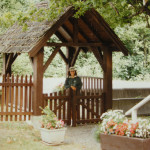 We continued to explore the island throughout our stay. Josie told us of many more spots to visit, and I particularly liked the Fulford area where we visited the churches.  By the lychgate of the Anglican church, there was a gorgeous oak tree that had been planted to commemorate the crowning of King George. Josie also introduced me to cryptic crosswords, something that later became a lifetime addiction. It was great fun attempting the crossword together, although neither one of us was able to figure out the special trick of the week.   The next day, we visited the craft fair, then spent the evening playing Scrabble, having abandoned our quest to solve the last bit of the crossword. However, that night, I was awoken by Sally, who was barking at a cat who had strayed onto the property. I woke up with a start, sat up hurriedly and banged my head on the roof of the camper.  Two seconds later, I had figured out the puzzle trick that had eluded us! Living proof that the saying, Knock some sense into her, has some foundation in reality. 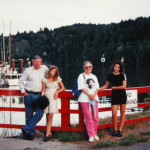 Josie also introduced us to the delicious filo and custard dessert, Baklava. However, it took several attempts for us to actually try it. On her first night home, we went to dinner at the Greek cafe, eagerly looking forward to dessert since Josie had recommended it so enthusiastically. However, by the time we had finished our meal, the Baklava was all sold out. We made several more attempts to sample the dessert. On one occasion, we arrived at the café to be told that the Baklava wasn’t ready, but to come back around three.  We went home to fetch the girls, but later, when we returned, it hadn’t been made after all.  However, the owners very kindly treated us to a different dessert on the house. We had no success until the final day of the holiday when we all went out to dinner again. The proprietor greeted us like old friends and was very relieved to finally present us with Baklava, freshly made that day. 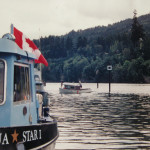 The next morning, Katie and I saw Hugh and Caroline off on the boat.  Once they’d left, we took Max for a walk  around the trails.  His nose was twitching, something that always meant trouble, and sure enough, we had to leash him after he found his way to a fenced field where sheep were grazing.  Thank the Lord for barbed wire – otherwise, I hate to think what the result would have been. Probably a lot of mutton and one dead dog once the farmer saw what he was up to. 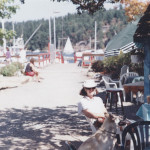 Relieved to have avoided disaster, we went back to town and headed for Toni’s. Morning coffee turned out to be great fun, for at the next table were two friendly locals, one of whom had two dogs and two newborn piglets!  Needless to say, Katie was enchanted with these, but Max simply didn’t know what to make of them, especially the little runt who was watching him curiously.   Was it a dog? Was it a rabbit? He was quite bewildered. Finally the runt made its way over to visit him. By this time, Max was quivering with excitement, but as he put his face down towards the tiny piglet, it stuck its snout against his nose and kissed him.  Max jumped as if he’d been stung. Everyone howled with laughter, but Max was one very embarrassed dog. The piglets didn’t have to worry about our Big Bad Wolf. He was as sheepish as the inhabitants of the nearby field.