Max’s behaviour continued to be erratic, but as the weather became warmer, the increase in outdoor activities provided him with more outlets for his energy. He loved it when everyone was out in the garden, especially when the girls put him through his tricks. They had trained him to jump for Frisbees and other such items, the command being ‘Hup’, at which point he’d leap into the air and catch whatever they tossed. One day, when he was down on the lawn, Caroline called from the deck and offered him a cookie. She waved it in the air and said, “Hup!” Max looked perplexed, did a couple of leaps, then raced for the stairs and pounded up to her as if to say, “There, I did it!” 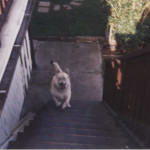 Unfortunately, the hot weather brought the usual mass of fair-weather walkers into the park, and the next thing we knew, there were anti-dog items in the local paper and complaints about the off-leash areas that we had worked so hard to attain. This type of press invariably triggered articles from pious dog-hating columnists who wrote diatribes questioning the validity of having dogs in the city at all. Predictably, the councillors took the side of the anti-dog brigade and started grandstanding on the subject at council meetings, a practice made even more annoying by the fact that I knew several of them never bothered to prevent their own pets from running free. On top of that, they had landed Burnaby residents with a 17% tax increase that year, and to add insult to injury, when I went to city hall to pay our bill, I met Councillor Doug Evans in the hall with his unleashed poodle trotting about enjoying the freedom of the building. Needless to say, when I returned home, I took time out to compose a broadside to the councillors who were stirring up the trouble, and also called Carson at the SPCA to ask him to rein in the pound patrols.

Still, out of aggravation came inspiration. I made a few notes about the things I remembered from the big pro-anti-dog battle of the eighties and filed them away for future reference. Later, this became the outline for my story, “A Political Tail”, in which a dog-hating bureaucrat was killed in the park and, in spite of the anti-dog brigade’s determination to blame a marauding canine, the killer proved to be unquestionably human. What fun that was to write. The story involved a group of dog walkers cutting secret trails where they could elude the pound men, pound trucks getting stuck in ditches, a search for a mysterious “Hound of the Baskervilles”, and a protest at a council meeting, complete with dog-biscuit shaped placards. Naturally, I will never own up to which bits are fact and which are fiction, but there are a few people living here in Burnaby who know the truth.

Of course, all the fair-weather walkers weren’t anti-dog, but some of them were problematic in other ways. Warm weather encouraged campers in the woods, not all of whom were as careful as they should be. One Saturday morning, Hugh and I came across a flaming campfire in a clearing. What was even more alarming, the fire had been set up against a log that stretched into the bush. We used the empty pop tins that had been littered about to get water from the creek and we doused it as best we could. Then we rushed home to call the fire department. Since the trail was one of the less frequented ones, we had to go back to show the firemen the way in and poor Max, though pleased to have a second walk, was very suspicious of the big men with axes and shovels.

As the weather improved, Edna and I also noticed an increase in the number of dubious-looking individuals on the trails. It seemed that crooks were fair-weather walkers too. Given some of the odd characters we came across, we were very glad to have our dogs at our sides. Once day, we met a woman and her dog coming along a well-hidden path that we considered our own private trail. Soon after the woman passed by, our dogs stiffened, barked and lunged ahead. Suddenly Edna caught a glimpse of a denim jacket in the bushes, which equally suddenly vanished from sight. We called the dogs, and they finally ran back to us. We saw no one as we moved ahead, but we couldn’t help wondering if the dogs had chased away someone who had followed the solitary woman into the bushes. It was no wonder that dog walkers loved rainy days; those were the only times we could be guaranteed a walk in peace. We, who were devoted to our four-legged friends, were no fair-weather walkers. We were all-weather walkers without a doubt.