The Easter break had been great fun, but it was back to school for everyone, including me.  Right around this time, Hugh and I decided to get serious about the soundtracks for our marionette shows, so we had gone to Annex and invested in some good recording equipment. We came home from our shopping trip $4000 poorer and with enough manuals to make me feel as if I was back at university.  It took me two months of intensive practice, amid phone and onsite tutorials, to learn the system. Max, resigned to spending his days hanging out in the music room while Mummy struggled to conquer her new creative tool, found a comfortable spot in the corner and claimed it as his own. 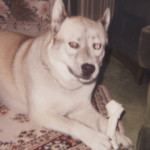 However, boredom was setting in, and it soon became apparent that Max needed to go back to school too.  His nose was out of joint at my preoccupation with my sound equipment, and his annoyance began to manifest on our walks.  For the first time, he charged at a leashed dog and got into a scrap—and was naughty and unrepentant afterwards. Once home, I put him in a long down, and he scowled mutinously the whole time. He was also becoming very possessive about his toys and treats, sometimes carrying his chew toy throughout an entire walk rather than leaving it behind when it was time to go. Often, he would simply find treasure along the way. Once he cracked up everyone who saw us by walking around the block with a McDonald’s chip container wrapped, muzzle-like, around his nose. Tennis balls frequently accompanied us home, and soccer balls too, even though it was obvious that he was struggling to get his jaw hooked onto them. And woe betide anyone who tried to get his loot away from him.

Given Max’s rebellious mood, Edna and I started walking the less-populated lower George Derby Land trails to avoid running into other walkers. These trails were lovely in the spring. Triliums, bleeding hearts and wild forget-me-nots abounded, along with ferns, fiddleheads and curly ground cover.  Max could run his little legs off there, and there was less danger of an incident.  But to my frustration, even here, Max found trouble, one day getting a scent of a coyote and taking off through the bush. When he finally responded to my shouts and whistles, he wheezed his way back, utterly exhausted, and we discovered he’d managed to lose his collar during his escapade.

I forged on with my sound project, but realized I had to take breaks in the afternoon and give Max some extra training walks. These proved a mixed blessing, however.  Max loved doing his reverses, and sitting and staying. He glowed with enthusiasm and went through his routines like a little circus horse. However, from the corner of his eye, he was always looking for anything that would provide some extra excitement. This was usually found in the form of the neighbourhood cats, and several times, I nearly dislocated my shoulder holding him back after he’d spotted a wandering moggy.  I became very conscious of watching my dog as we walked, since I could tell from the set of his ears whether he’d sighted anything of interest. But one day, this stratagem backfired on me dramatically.  As we turned into our driveway, I was watching Max like a hawk so he couldn’t didn’t take me off guard. I was wearing a Tilly hat with a wide brim, and with my head down, I did not notice that in manoeuvering around our parked car, I had gone too close to the overhang of our bay window.  The next thing I remember, I was lying on my back with a very bewildered Max standing over me licking my face. I had knocked myself out cold. Talk about going flat out for my dog.

Episode 36: Back to School