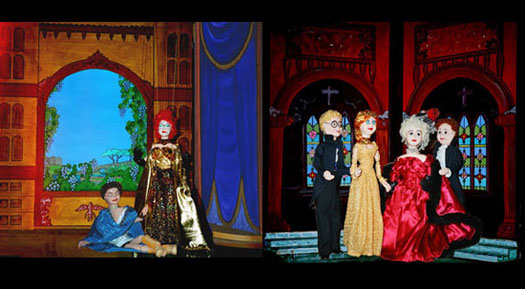 ELWOODETTES MARIONETTES, formed in December 1992 by Hugh and Elizabeth Elwood, has a repertoire of twenty shows designed for different occasions.  The company performs privately and publicly, and for the 13-year period from 1998 to 2010 created an annual Christmas musical for the Vagabond Players in New Westminster.   These lively family shows were 60-65 minutes in length, and contained music and satire for the grown-ups as well and fun and fantasy for the youngsters.  The ongoing tradition of these productions earned the company the description, ‘New Westminster’s legendary Elwoodettes Marionettes’ from Peter Birnie of theVancouver Sun.  The company has also performed regularly at the Burnaby Village Museum, and will continue that tradition again by performing the lively 10-minute mini-operetta, Die Fledermaus, the Sequel from December 31 to January 4th this coming season.  Over the years, Elwoodettes has performed for many community groups, and in 2006, went international and performed to great acclaim at the Puppetry Arts Institute in Kansas, Missouri.  However, a major setback occurred in 2008 when the company trailer, complete with both theatres and all the tech equipment and sets for the travelling shows, was stolen and never recovered.  The theft resulted in a great deal of work to replace the sixteen years worth of hand-crafted labour that was lost, but the majority of shows are once more available.