Fifteen years ago, I wrote a marionette musical called The Christmas Spirit, which Elwoodettes Marionettes produced for the Vagabond Players Christmas show in 2003. The audiences were greatly amused by the whimsical plot where, though time travel, a woman named Mary Fairfax was brought forward several hundred years and found herself inhabiting an old English manor house which was haunted by her spirit. Thus she found herself present in both body and soul.

Because the plot went over so well, I thought it would be fun to take that concept and use it in a romantic comedy for actors, as opposed to marionettes, and what better place to premiere the play than the Bernie Legge Theatre, which reputedly has several ghosts of its own. The original story took place in England, but the play is set in Canada—in a heritage home in the Queens Park area of New Westminster.

The historical details have been adjusted accordingly. Mary’s ‘tragic’ story now stems from an event during the second Boer War, specifically the battle of Paardeberg Drift, a struggle where Canadian soldiers stood out for their bravery. The references to Mary being the star of the local operatic society are also pertinent as there was an opera house in New Westminster at the time. The design for the wainscoting and other set details were inspired by a tour of Irving House.

One reference in the play needs clarification: Geordie Fairfax, the tall, cantankerous Scottish landlord in the play, is referred to by his tenants as ‘Wee Geordie’, an eponym that will resonate with people who are old enough to have seen the delightful 1950s comedy of that name that starred Bill Travers. The film was loosely based on the life of Scots Olympian and farmer, Tom Nicolson, so the real Geordie, being a sturdy hammer thrower, was definitely not ‘Wee’.

Another point of interest for long-time Vagabond Players patrons: The opera collages that will be decorating the set are the artwork of the late James Keary, a member of the club who acted in and designed sets for Vagabond Players shows during the eighties. Jim is fondly remembered by all who knew him. He was a great supporter of my own artistic endeavours and I like to think that he, along with his collages, will be there in spirit on opening night. 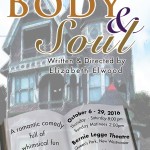 The play is now cast, with a wonderfully talented group of actors, and an equally fine production team is in place. The lovely poster design by Michael McCray is ready to go, reflecting the New Westminster heritage-house location. The cast list and other details can be seen on the Body and Soul page in the play section on this website. Another new play! Another new adventure.