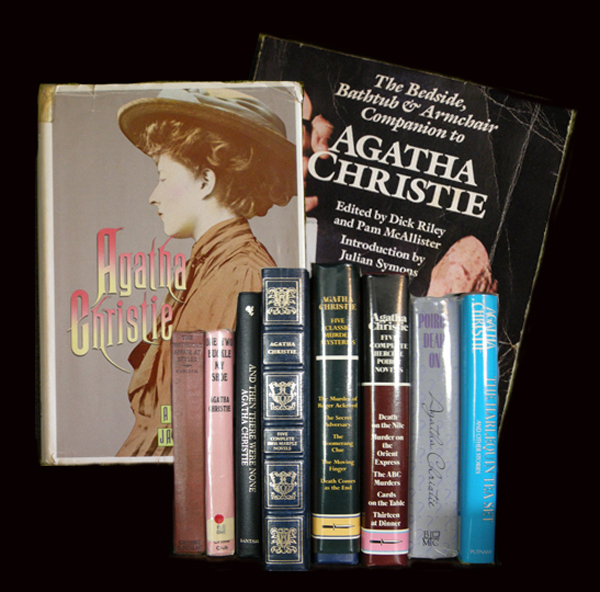 Since my new mystery book opens with a story titled “The Agatha Principle”, it seems only appropriate to make my first blog a tribute to Agatha Christie, the Queen of Crime.  I have a special fondness for Christie’s work, because she was the writer who first introduced me to the murder mystery.  It is probably because I discovered her books as a teenager that I am writing murder mysteries today.  Since those early years reading Agatha Christie, I have moved on to enjoy many other wonderful mystery writers, but it was her books that got me started on my love affair with the genre.

Over the years, I have read all of Agatha Christie’s mysteries and have seen the films that were based on her books.  I have enjoyed the various television series made from her stories and I have seen several of her plays on stage.  I also directed a production of The Mousetrap with my high-school drama students, so the only reason that Agatha Christie is now merely a ‘good’ as opposed to a ‘great’ read for me is that I know all the endings.  However, I still occasionally get nostalgic pleasure in going back to one of her books and seeing the way she laid her trail of clues and red herrings to aid and divert the reader.

I was extremely flattered when the very first review of my first book said that I had written “Classic murder mystery stories reminiscent of Agatha Christie” and I am always irritated when literary or theatre snobs downgrade her work.  Naturally, with such a huge volume of work, some pieces are going to be more engaging than others, but what other writer has set so many intriguing puzzles, loaded with clever twists and turns, for the mystery lover to solve?   I have to admit, though, that I prefer the books and the television adaptions to the stage plays.  I think the medium of film is better suited to generate suspense and put across the more reflective moments of the characters, whereas the stage plays, depending so much on dialogue, lose some of the tension that comes across so well in the books and on screen.

Still, if well-directed, the plays are tremendously entertaining.  My favourite is Witness for the Prosecution, though, unfortunately, it is rarely performed, due to the large cast and the demands of the set.  Ironically, since it is the only one I have staged, The Mousetrap is my least favourite, probably because the second act is long on interviews and short on action, making the script a considerable challenge for the director and cast.  Given that the play has run for such a long time, many people talk of it as if it’s an institution rather than a mystery drama.  Some of my theatrical friends consider it more of a farce than a mystery, a piece as innocuous as the game of Clue designed to please the middle-aged and the middle class.  I don’t agree with that point of view.  Yes, there is some humour, but the subject matter is serious and extremely topical—today’s newspapers frequently cover stories of social worker’s tragic mistakes, of foster-care gone wrong and officialdom passing the buck—and when played straight, The Mousetrap can be compelling.   I’m a traditionalist, like my fictitious director, Jordan Hope, in my story “The Agatha Principle”, and I get extremely irritated when I see productions that veer into parody, with the actors descending into caricature in the search for cheap laughs instead of playing the characters for sincerity.  I believe one of the real strengths of Agatha Christie is her understanding of human nature and the needs, passions and ambitions that govern people’s actions.  However much the exterior trappings may date a story, those things never change.

The Mousetrap certainly has an impressive history.  It was first performed in Nottingham in October, 1952.  Most of the reviews were good, although the critic from the Sunday Dispatch disliked the play.  According to the 1984 biography by Janet Morgan, Christie herself thought it “quite a nice little play” but did not believe it would run for much more than six months.  Nobody could have realized what the future was going to hold.  The play celebrates its 60th anniversary this year and two local productions have been part of that celebration.  One, directed by my good friend, Dwayne Campbell, had a highly successful run at Vancouver’s Metro Theatre in April.  Another followed soon afterwards in White Rock.  These are only two of the many productions mounted world-wide to celebrate the milestone.  However, I was not thinking about this special anniversary when my own story went into print.  The timing was purely coincidental.

I wrote the first draft of “The Agatha Principle” in 2009 after re-reading Agatha Christie’s short story, “Three Blind Mice“.  This was the story on which she based the play, The Mousetrap.  After reading the story, an idea occurred to me, a twist that was a play on the plot of the Christie story.  I hesitated at first, because of the issue of revealing the plot, but given the sixty-year record of public performance, and having scrolled the Internet and seen how the solution is so readily available on a variety of sites, I decided to go ahead, hoping that my story would be perceived in the spirit it was intended—as a tribute to Dame Agatha herself.  However, this blog can serve as a spoiler alert:  If you are anticipating attending one of the countless productions of The Mousetrap being mounted this year and you don`t know the ending of the play, you might want to wait before reading my story.  And for those who do know the solution and intend to read my book, I hope you have as much fun trying to solve “The Agatha Principle” as I had weaving a tale around a clever plot devised by the ingenious Queen of Crime.

A PLAY ON A PLAY: “The Agatha Principle” and The Mousetrap