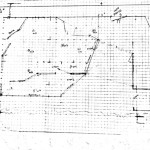 The set challenge for this play is that Act I has five short scenes, all in different locations, and Act II requires a lavish indoor/outdoor set. Larger theatres with good wing space have the luxury of screening the Act II set and building small trucks for each of the Act I scenes which can run on and off as needed. 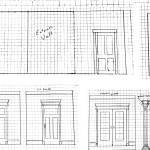 However, our stage was small, and the best option for the director was to play the Act I scenes in changing pools of light which allowed for quick and unobtrusive changes of furniture and props. In order that she did not have to play these scenes against drab mid-stage blacks, I designed a set with hinged (at one end) moving walls on support wheels that could roll back at intermission and fit with the more elaborate pieces of the Act II set. 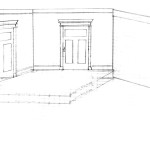 The Act I set worked well, even though the action all had to be played forward. However, one drawback of the moving wall was that the sightlines were also altered between acts. Our builders cleverly met the challenge by devising a beam with a screen that moved along with the set. 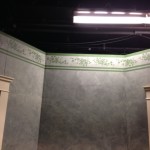 The split set presented some other challenges, since in Act II, one section of the walls became the interior of the garden room, and another became an exterior garden wall. The terrace contained a pergola, and behind this, the audience also had to see the brick exterior wall of the house and an entrance that would take the actors back inside. 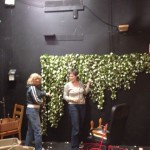 The brick exterior wall was not an issue since it was hidden throughout Act I, but the wall that changed from Act I interior to Act II exterior had to be disguised. Rather than have crown mouldings on the top of the walls, I designed a frieze that could match up with the interior walls in Act I, but could be covered with ivy at intermission to create the garden wall. 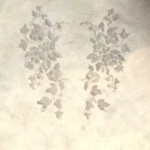 It took far longer to tape the lines for the stripes outlining the frieze than for actually doing the work with the stencils. However, the delicate stencil pattern served double purpose, since we were able to use it to add a delicate feature to the stonework on top of the arch. 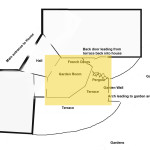 Because the Act II set had so many entrances and exits, both interior and exterior, and because the garden room was only one room within a large country house, I made up a map of the house and estate with a highlighted rectangle to show how the stage area fit within the whole. The director was able to use this to clarify the layout for the cast. 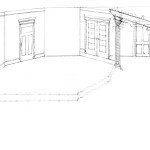 The audience reaction at the Act II transformation was very gratifying, and a big thank you goes to my husband, Hugh, along with Peter Borgmann, Rick Pare and Gilles Deschenes for engineering the design and making it work so well, to director, Jacqollyne Keath for trusting me with her set, to Dwayne Campbell who lent his expertise in an advisory capacity, and Rose McNeil, my co-set decorator who came up with the techniques to achieve the effect I wanted. Thanks, too, to the other great volunteers who helped paint. What a great team effort!